In an annual statement at the United Nations Headquarters in New York, the Foreign Minister of Nicaragua highlighted his country’s progress towards achieving the anti-poverty goals, which is the theme of this year’s General Assembly.

In his address to the 68th high-level debate, Minister Samuel Santos Lopez said that Nicaragua has made strides on overcoming poverty, hunger and inequality, while strengthening its economic and commercial relations with the international community and its organizations.

Among the highpoints, Mr. Santos noted that the UN Food and Agricultural Organization (FAO) recognized the country’s “remarkable and exceptional progress” to ensure food security and reduce the prevalence of undernourishment.

UN Women places Nicaragua among the first countries in the world with the highest percentage of women in government positions. Women occupy more than half of the positions in the Executive and Judiciary Branches, as well as in Municipal Courts. Some 42 per cent of female deputies are in the Judiciary Branch.

Turning to the wider Latin American and Caribbean region, the Nicaraguan official reiterated his country’s commitment to the struggle of other people for their full independence and sovereignty.

Mr. Santos called for the immediate and unconditional terminations of the economic, commercial and financial embargo imposed by the United States against Cuba.

In addition, Mr. Santos reiterated support for Puerto Rico in their struggle for self-determination, independence and social justice.

Later in the day, UN Secretary-General Ban Ki-moon met with Mr. Santo and the two discussed several current issues of mutual interest such as the post-2015 development agenda and the recent Security Council resolution on Syria.

They also discussed developments pertaining to the implementation of the International Court of Justice’s judgment in the case concerning Territorial and Maritime Dispute (Nicaragua v. Colombia). 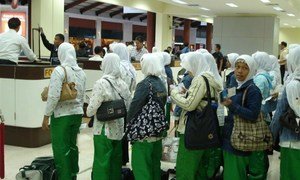 A United Nations treaty entering into force today will extend the labour and social rights of some 53 million domestic workers around the world.