The Spanish Government must accelerate its response to thousands of cases of enforced disappearances committed during its civil war and dictatorship years ago, a group of United Nations experts said today, stressing these crimes should not go unpunished.

“The State must assume a leadership role and engage more actively to respond to the demands of thousands of families searching for the fate or whereabouts of their loved ones who disappeared during the civil war and the dictatorship,” said the members of the UN Working Group on Enforced or Involuntary Disappearances, at the end of their visit to the country.

Jasminka Dzumhur and Ariel Dulitzky, two of the five members of the Group, visited Madrid, Catalonia, the Basque country and Andalusia, where they met with several authorities, relatives of the victims, and different civil society actors.

“In all places visited during this week, the Working Group has met with hundreds of relatives. Virtually everybody has expressed deep frustration towards the administrative obstacles and difficulties they face in accessing the information needed to clarify the fate and whereabouts of their loved ones,” the experts said.

“Given the passing of time and the old age of many of the witnesses and relatives, it is urgent that the State respond to their claims as an immediate priority.”

The experts noted that since Spain’s return to democracy, the Government has taken limited steps to ensure truth, justice and reparation for the cases of enforced disappearances, and added that progress so far has been achieved mainly through initiatives that have been led or carried out mainly by relatives of the victims or civil society organizations.

“There is no ongoing effective criminal investigation nor any person convicted,” the experts said. “The State should assume its responsibility to ensure that these initiatives are part of a comprehensive, consistent and permanent State policy.”

Procedural rights to an investigation, to truth and to justice are central to victims’ perceptions of reparation, they said.

Some of the challenges in the country include the fact that the Amnesty Law remains in force, the lack of a law on access to information, the difficulties in accessing archives, and the lack of a national plan for searching for disappeared persons, among others, they added.

The Working Group was established in 1980 to assist families in determining the fate and whereabouts of disappeared relatives. It aims to establish a channel of communication between the families and the Governments concerned, to ensure that individual cases are investigated. The Group will present a report on its visit to the Geneva-based Human Rights Council in 2014.

♦ Receive daily updates directly in your inbox - Subscribe here to a topic.
♦ Download the UN News app for your iOS or Android devices.
Spain 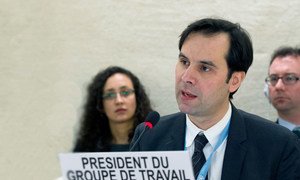 A panel of independent United Nations experts have called for new strategies to tackle enforced or involuntary disappearances and highlighted the impunity that prevails for this crime.