The United Nations refugee chief today called on Syria’s neighbours to continue to keep their borders open and provide protection to those fleeing the conflict, and on the international community to help these countries shoulder the burden.

“It is a miracle that refugees have been spared a second humanitarian catastrophe after escaping the one inside Syria. There is only one reason for this – the generosity of the neighbouring countries,” said UN High Commissioner for Refugees António Guterres.

Addressing a special meeting in Geneva focusing on the Syria crisis, Mr. Guterres said that Lebanon, Jordan, Turkey and Iraq have been sheltering an unrelenting flood of Syrian refugees, saving lives and providing protection.

These four countries, together with Egypt, today host more than 2.1 million registered Syrian refugees. This does not include the hundreds of thousands who did not come forward for registration, or Syrians living in these countries as economic migrants, he noted.

“They have been generous hosts to their neighbours, but all of them are stretched to their limits.”

“It is my duty to ask the governments of these States, like all others, to open their borders and continue to provide protection to all Syrians in need,” Mr. Guterres told the gathering.

“But it is also my duty to ask the international community to realize that this burden is far too heavy to be borne by only the neighbouring countries, and to put in place more – and more robust – measures of sharing this burden.”

“More international solidarity with host countries and communities is now a must,” said Mr. Guterres. “This does not only mean assistance through humanitarian organizations. It must also mean emergency development support – structural assistance – to neighbouring States, most importantly in health, education, housing, water, and energy supply.”

Helen Clark, Administrator of the UN Development Programme (UNDP), said that for people fleeing for their lives from Syria, the ability to cross the borders of neighbouring countries has been of immense importance.

“Yet it is also true that offering refuge on the scale required has had a huge impact, particularly on those communities where the numbers of refugees are high relative to host populations. Clearly, the costs on host communities and countries cannot be borne by them alone.”

Miss Clark said that while the political and humanitarian dimensions of the Syria crisis have been recognized from the outset, there is now heightened awareness that this is also a development crisis.

“It will have a deep and long-lasting impact on the development and future prospects not only of Syria. Neighbouring countries’ development prospects too have been seriously impacted,” she stated.

“The challenge now is to ensure that our collective response to this complex crisis is both humanitarian and developmental in approach. The humanitarian needs are very stark, but the developmental challenges exacerbated by the crisis in the sub-region cannot be ignored.”

Mr. Guterres, in separate remarks to the opening of the annual executive committee of the UN refugee agency (UNHCR), noted that more people have been forced to flee from their homes this year than at any time in nearly two decades.

The “massive” fresh flows of refugees in 2013, including over 1.5 million who have left Syria, is stretching UNHCR’s resources to the limit, said Mr. Guterres. He added that although “multiple strains on our delivery capacity are growing from year to year,” the agency was delivering protection and assistance to the rising number of refugees.

Also addressing the meeting, Under-Secretary-General for Humanitarian Affairs Valerie Amos reported that despite the humanitarian community’s commitment to stay and deliver in Syria, access problems are preventing them from reaching many of those in need.

“Entire suburbs and towns are deliberately besieged or cut off by fighting. Dozens of checkpoints block main roads between towns and cities,” she stated. “It is clear we have a protracted crisis that goes well beyond what humanitarians can do.” 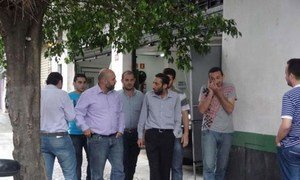 The United Nations refugee agency today welcomed Brazil’s announcement that it will provide special humanitarian visas for Syrians and other nationals affected by the conflict and who wish to seek refuge in the South American nation.