The head of the United Nations Educational, Scientific and Cultural Organization (UNESCO) today deplored the suicide attack that took place on Saturday in Timbuktu, Mali, which led to two deaths and several injuries as well as caused substantial damage to a mosque inscribed on the World Heritage List.

Yesterday's attack, which targeted the military personnel of the Malian armed forces at the entrance of their base in Timbuktu, occurred near the Djingareyber Mosque. There was substantial damage to the mosque and many houses nearby, UNESCO said in a news release.

“I wish to express my solidarity with the people of Mali, the families and especially the community of Timbuktu, for the suicide bombing that brings back such terror and violence by injuring the Malian people at its heart,” said the agency's Director-General Irina Bokova.

“UNESCO is more determined than ever to pursue its efforts to rehabilitate the cultural heritage of Mali and the protection of ancient manuscripts,” said Ms. Bokova.

The Djingareyber Mosque had already suffered damage during the fighting between Government forces and Tuareg rebels that began in early 2012. The mosque is one of three madrassas comprising the University of Timbuktu. It is believed to have been built around 1327, mostly out of straw and wood with some limestone reinforcements.

In June, UNESCO reported that the damage to Timbuktu's cultural heritage due to the fighting was more extensive than first estimated. An assessment visit found that 14 of the city's mausoleums, including those that are part of the UNESCO World Heritage sites, were totally destroyed.

In addition, an estimated 4,203 manuscripts from the Ahmed Baba research centre were lost, and another 300,000 were in urgent need of conservation.

Earlier this year, experts at a UN forum adopted an action plan to rehabilitate and safeguard Mali's cultural heritage. Estimated to cost some $11 million, the plan also aims to provide training activities so as to re-establish appropriate conditions for the conservation and management of cultural heritage, including manuscripts and intangible heritage. 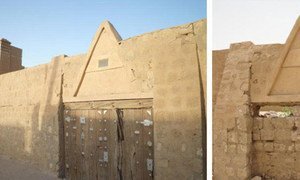