Secretary-General Ban Ki-moon today voiced his sadness over an attack in Timbuktu, Mali, that led to the death and injury of several people and which was condemned by his top envoy in the country.

According to the UN peacekeeping mission in Mali (MINUSMA), the attack targeted the military personnel of the Malian armed forces at the entrance of their base in Timbuktu. Initial reports said two civilians were killed and several others were injured.

“I strongly condemn such attacks. They are unacceptable,” said Bert Koenders, the Secretary-General’s Special Representative and head of MINUSMA.

Mali, with the help of international partners, is working to restore order following a military coup d’état, fighting with Tuareg rebels and the seizure of its northern territory by radical Islamists during the past two years.

In a meeting with Mali’s President Ibrahim Boubacar Keita at UN Headquarters in New York, Mr. Ban underlined the importance of restoring security in the north of the country.

A durable solution would require security sector reform, improved governance throughout the country and the establishment of state authority in the north, he said, according to a read out of the meeting provided by his spokesperson.

Mr. Ban stressed the readiness of MINUSMA to help the Malian Government and people face these challenges, and the world body’s support for inclusive peace talks and the organization of legislative elections. 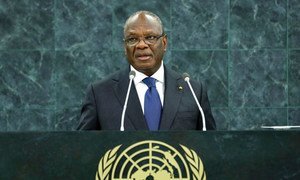 Terrorist and rebel groups chased out of Mali earlier this year now pose a serious threat to peace and stability in the whole sub-Saharan region, the new President of Mali, Ibrahim Boubacar Keita, told the United Nations General Assembly today, calling for full international support to counter the cross-border scourge.