UN Photo/Ryan Brown
Perry Gladstone Christie, Prime Minister and Minister of Finance of the Commonwealth of the Bahamas.
28 September 2013

The Bahamas today called on the United Nations to help develop multilateral global mechanisms for the governance of offshore financial services, warning that high-powered States were trying to force their will on smaller nations like his own and cut off their livelihood.

The Bahamas today called on the United Nations to help develop multilateral global mechanisms for the governance of offshore financial services, warning that high-powered States were trying to force their will on smaller nations like his own and cut off their livelihood.

“We see this same dynamic at work in the ongoing economic aggression of many of the more developed countries against small offshore financial service-based economies, especially in the

Caribbean region of which The Bahamas is a part,” Prime Minister Perry Christie told the General Assembly as it wrapped up the first week of its annual General Debate.

“Some have used their power either unilaterally or in small groups of high-powered nations to impose their will, arguing that there is something fundamentally immoral, something intrinsically sinister, about the accumulation of wealth in offshore jurisdictions. We reject, that premise and we criticize in the strongest possible terms the efforts of some to maim and cripple, if not destroy, the offshore economies within our region.”

He stressed that the anti-money-laundering, anti-terrorism funding and anti-criminal regulatory regimes of many of these economies are “far more robust and demonstrably far more effective than the corresponding regulatory regimes in many of the same countries that are leading the fight against us.”

He noted that offshore financial services can be responsibly operated and regulated and that most of the investment of offshore wealth takes place in and generally benefits the developed world.

“Unilateralism and diplomacy-by-coercion are not the way the world should be dealing with this issue,” Mr. Christie said.

“Instead we need to challenge the UN to take the lead in developing and refining multilateral global mechanisms for the governance of the offshore financial services sector; mechanisms that wilt meet the legitimate demands of the developed world for the protection of their fiscal systems and their need for greater security, while at the same time allowing offshore financial service economies to continue to grow in an orderly and properly regulated way.

“And let us not forget that the destruction of these offshore financial service economies will destabilize the countries that depend upon them for their livelihood. To destroy this sector in the

Caribbean would effectively cause tens of thousands of newly empowered middle class citizens to slip back into poverty or to migrate to the developed world.”

♦ Receive daily updates directly in your inbox - Subscribe here to a topic.
♦ Download the UN News app for your iOS or Android devices.
multilateral

UN unrivalled for its ability to bring nations together to solve key issues, official says

‘Multilateral efforts must guide our quest for peace and security,’ India tells UN 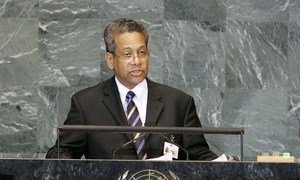