28 September 2013
The future global development agenda must take into account the specificities of different countries, especially the smallest and weakest among them, the Prime Minister of Mauritius told the General Assembly today.

The future global development agenda must take into account the specificities of different countries, especially the smallest and weakest among them, the Prime Minister of Mauritius told the General Assembly today.

“We need a common development framework but with differentiated milestones and implementation strategies because of existing disparities in levels of development,” Navinchandra Ramgoolam said in his address to the Assembly’s annual high-level debate.

Member States have been engaged in negotiations on the global development agenda after 2015, the deadline for achieving the globally agreed anti-poverty targets known as the Millennium Development Goals (MDGs).

Mr. Ramgoolam said the post-2015 development agenda should include a roadmap for an interconnected world economic system, premised on the assumption that the global economy could very well be as weak as its weakest links.

“Of course, the specificities of some countries or regions and the pace at which transformative shifts are implemented may not always be appropriate for universal targets,” he noted. “But the conceptual approach to, and the construct of, the post-2015 agenda should more than ever before in history start with the shared conviction that economies are interdependent.

The Prime Minister added that the prospects for global economic growth remain uncertain, largely as a result of multiple challenges faced by developed countries.

“In such an interconnected and inter-dependent world as ours, not a single nation is immune from external shocks,” he said. “Small developing countries are very much concerned at the slowdown of global growth, decline in international trade, decreasing job opportunities and rising inequality.

“Small States are particularly susceptible to external shocks as they are heavily dependent on foreign markets for trade, tourism and investments. They are also concerned about energy and food prices, which are subject to high volatility.”

“The conventional divides of the past are no longer valid,” he stated. “Actions taken at national levels are not sufficient; there should also be reinforced cooperation and partnerships at regional and international levels. It is therefore imperative that the weaknesses and inequity of present global economic governance should be addressed urgently.” 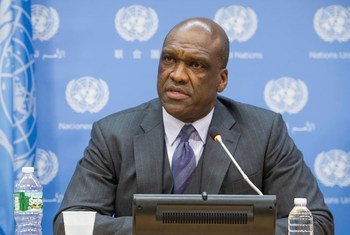