Addressing other senior level officials from around the world, Evangelos Venizelos said that Greece “felt the pressures of migration.”

His country has reviewed its national action plan and looks forward to the UN General Assembly high-level dialogue on International Migration and Development to be held on 3 and 4 October.

Mr. Venizelos, who is also the Greek Minister for Foreign Affairs, said that there had been a positive impact on migration both for home countries and destination countries, and the upcoming meeting on that topic was a good opportunity to participate in the common efforts on migration.

In his statement, the Greek official also noted his country’s active contribution to the Human Rights Council, for which it was submitting its candidature for the 2017-2019 term.

Mr. Venizelos also called the launch of the peace negotiations between Israel and Palestine a “positive step” towards security in the region, as it is now time to take bold and concrete steps towards peace.

He further condemned the use of chemical weapons in Syria, and lent support to the UN political efforts.

The General Debate continues through 1 October. 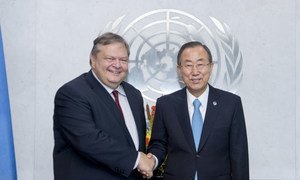 Secretary-General Ban Ki-moon today met with the Greek Foreign Minister to discuss United Nations-led talks between Greece and the former Yugoslav Republic of Macedonia in the dispute over the latter's name.