27 September 2013
Taking the podium at the United Nations General Assembly today, King Tupou VI of Tonga and Prime Minister Tuilaepa Lupesoliai Sailele Malielegaoi of Samoa joined leaders of other small island developing States (SIDS) in urging that sustainable development agenda address climate change in a way that is integrated throughout its targets.

“Tonga joins SIDS in calling for the inclusion of climate change as a cross-cutting issue of sustainable development goals (SDGs),” King Tupou said in reference to the environmental and anti-poverty targets now under discussion for implementation following the 2015 deadline of the Millennium Development Goals (MDGs).

“Oceans are a thematic priority and should also be prominently featured in the SDGs and post-2015 agenda,” he added. Commending UN Secretary-General Ban Ki-moon for his initiative to convene a high-level climate change summit in 2014 and urged leadership from developed countries to “enhance their mitigation ambition.”

He also joined other small islands in affirming that, in laying the groundwork for a post-2015 development agenda – a priority for the 68th General Assembly that is now holding its General Debate – be influence by the outcome of the Third International Conference on SIDS to be convened in 2014 in Samoa.

Pointing to examples of international cooperation that could assist Pacific islands in their struggle for equitable sustainability, he stressed, in particular the importance of the establishment of a Pacific Regional Data Repository for the UN’s Sustainable Energy for All initiative, plans for which were made public today with the participation of Secretary-General Ban. 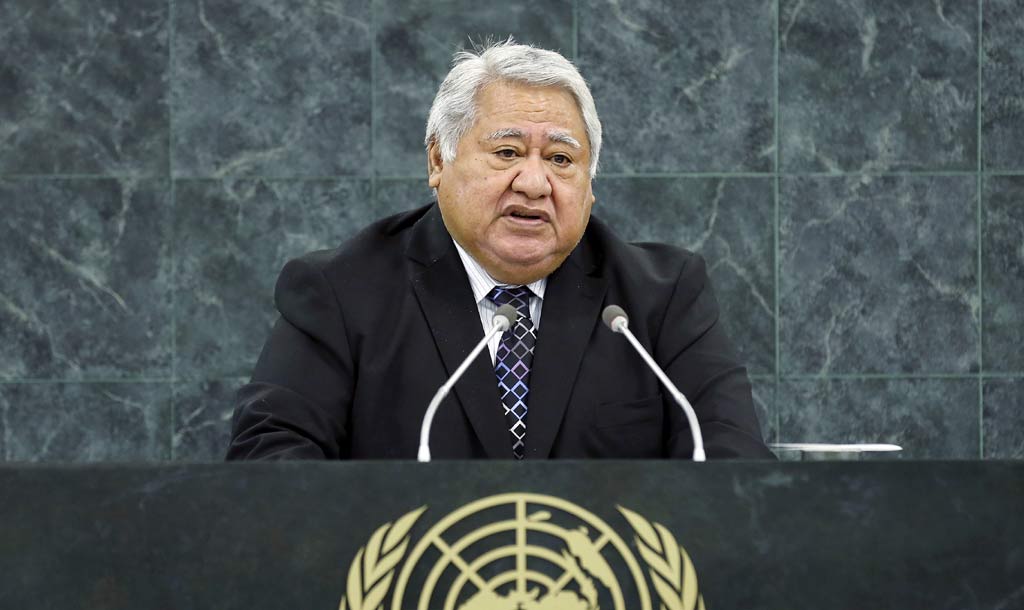 Samoa’s Prime Minister stressed that the causes and effects of climate change and the solutions to address them are widely known and the roles and responsibilities of different countries are evident.

“We know already in the Pacific as will many other parts of the world from bitter and harsh experience what the consequences of climate change are and these will only become more severe if not enough is done,” he said.

“Sadly, what is evident to us in the climate change negotiations is the continued triumph of vested interests in preventing and delaying the action that must be take,” he said, adding, “Let's rise to the occasion and be part of the solution.”

Mr. Sailele Malielegaoi also stressed the importance of the control of small arms and light weapons, the ending of nuclear testing and the peaceful resolution of conflicts to his region and the world.

In a separate event today, Secretary-General Ban met with Pacific Island Forum leaders on the sidelines of the General Debate, praising them for their resolve on climate change and other areas as shown in the adoption of the Majuro Declaration.

Thanking Samoa for agreeing to host the SIDS conference, he said, “The Forum and the United Nations are becoming close partners,” not only on climate change but also many other issues.

“The Pacific region is changing rapidly,” Mr. Ban said. “The United Nations is very aware of the shifting geo-political dynamics and the increasing involvement of Pacific countries in regional and global issues,” he added. 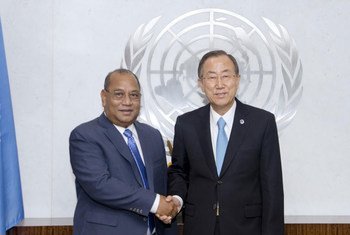 22 September 2013
Secretary-General Ban Ki-moon and the President of the Marshall Islands today discussed ways to strengthen the partnership between the United Nations and the Pacific island nations.