27 September 2013
Experts from the fields of law enforcement, research and academia gathered this week at a United Nations meeting in Vienna to find ways to combat the exploitation of children online, which has become more prevalent due to technological advances.

“The exploitation of children is not a new phenomenon, but the digital age has exacerbated the problem and created more vulnerability to children,” said the Executive Director of the UN Office on Drugs and Crime (UNODC), Yury Fedotov.

While advances in information and communications technologies (ICTs) have not necessarily given rise to entirely new forms of child abuse, they have in some cases changed the nature and dimension of the exploitation.

“Prior to the Internet, an offender was thought to have a huge collection with 150 images of children; today a 150,000 image collection is quite standard, and a 1.5 million image collection not unheard of,” said Dr. Joe Sullivan, a forensic psychologist who works with child sex offenders.

Children and young people are also adopting new technology earlier and more often, and unwittingly exposing themselves to online child predators at an unprecedented rate. Sexual abuse for private and commercial purposes, child trafficking, cyber grooming and cyber bullying are just some of the risks the digital age has brought to children across the world, noted a news release issued by UNODC.

“Before, non-vulnerable children had parents to act as a barrier as to whom they were in touch with – now this is gone,” said the Assistant Director for Human Trafficking and Child Exploitation at INTERPOL, Michael Moran.

According to UNODC, the majority of victims are girls and online predators hide under anonymous identities in cyberspace. However, their online trail has made it easier in certain instances to indentify them.

Experts agreed that better education and awareness are essential to protecting children and emphasized that parents must work to overcome the ‘generational digital divide’ and take a vested interest in the technology they give their children, educating them on their safe use and on the potential ramifications of careless online behaviour.

“Parents and educators need a good understanding of how sex offenders work,” said Dr. Sullivan. “They are often surprised at how sophisticated offenders are, and at the levels of manipulation they go through to gain access to children.”

While currently there is no consistent legislation across countries regarding online child abuse, Mr. Fedotov said UNODC is in a unique position to help countries deal with this issue at the global level.

“We can encourage effective cooperation between countries in investigations, and support global awareness efforts to educate parents and children on the safe use of ICTs. But everyone must play their part – including the private sector, which is ultimately the major driving force behind technological developments.” 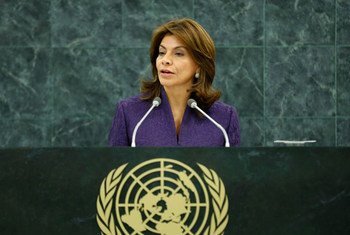 24 September 2013
Costa Rican President Laura Chinchilla-Miranda highlighted in an address to the United Nations today the contribution of young people to the new development agenda through innovation and the use of new technologies.