South Sudan has had to build a country literally from scratch since it gained independence two years ago, Vice President James Wani Igga said today in his address to the high-level debate of the United Nations General Assembly.

“We must have made errors of judgment as we try to fix a war-devastated country,” Mr. Igga said, as he appealed for goodwill to continue.

Since South Sudan gained independence from Sudan in July 2011, the peace between the two countries has been threatened by armed clashes along their common border and outstanding post-independence issues that have yet to be resolved, notably the status of the oil-rich area of Abyei.

Speaking to delegations on his country’s relations with Sudan, Mr. Igga said that it has been “a mixture of cooperation and squabbles” but acknowledged that there is “no alternative to lasting peace other than harmony and cooperation.” He called on the international community to step up its role in narrowing the gap between the two parties.

On the disputed area of Abyei, Mr. Igga promised cooperation to implement an agreement on its final status through a referendum set for October 2013 by the African Union High-Level Implementation Panel (AUHIP).

A set of security and economic agreements – signed in the Ethiopian capital under the auspices of the AUHIP – include provisions on security, the common border and economic relations aimed at enabling the two nations to fulfil their obligations under a so-called roadmap for easing tensions and facilitating the resumption of negotiations on post-secession relations.

Turning to the eastern state of Jonglei, one of ten states in the country, the Vice President stated, “It has serious security and infrastructural impediments.” He went on to say that the Government is determined to transform the army, the Sudan People’s Liberation Army (SPLA), into “a professional National Army that respects human rights and the rule of law and committed to the protection of civilians.”

He expressed gratitude to the UN Mission in South Sudan (UNMISS), which had helped the Government transform hundreds of former combatants into a police force “conscious of the rule of law.”

Mr. Igga expressed regret for the loss of lives of the Indian peacekeepers, the Russian helicopter crew and the Kenyan and South Sudanese relief workers in Pibor county.

He was referring to incidents in which UN peacekeepers and humanitarian workers have been caught up in the violence in Jonglei. An estimated 100,000 civilians in Jonglei alone have been cut off from life-saving assistance as a result of fighting between State and non-state armed actors, and the recent resurgence of inter-communal clashes, according to the UN.

The Security Council has called on Juba to expedite safe and unhindered humanitarian access for the timely and full delivery of aid to all civilians in urgent need of assistance in accordance with relevant provisions of international law.

The Vice President also said the country is being run according to “acceptable standards of competence,” and called on “experts” to appreciate the bigger picture of “how well the country is run outside Jonglei state.”

Government spending has been reduced by 40 per cent and non-oil revenue has been increased considerably, he added. Meanwhile, efforts are being made to address literacy rates among women, which is below 18 per cent, and to increase their political participation.

“We are determined to uproot impunity and corruption, a phenomenon which is a symptom of post-conflict States,” said the Vice-President. 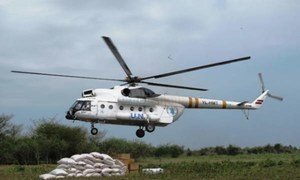 Some 55,000 people in South Sudan have received essential items from the United Nations and its partners, after having been displaced by conflict in the country’s Jonglei state, the world body said today.