The President of the General Assembly today lauded the partnership between the United Nations and the Association of Southeast Asian Nations (ASEAN), adding that the regional bloc has much to offer from its experiences to the rest of the world.

“ASEAN represents a best case example of regional cooperation – nations joined together in a spirit of equality to advance prosperity and peace in the region,” John Ashe said at the annual ASEAN-UN Ministerial Meeting, held on the margins of the Assembly’s high-level debate.

“By promoting regional integration, partnering for development and maintaining regional security, ASEAN is able to advance the goals of its individual members, strengthen the capacity for collective action and provide an example for other regions to emulate.”

Mr. Ashe said that one of the areas in which ASEAN’s experience can benefit the rest of the world is regional cooperation for peace and security. “Recent upheavals in the Arab world, ongoing conflicts in Africa, in Central Asia, rising tensions in other parts of Asia and security-related problems in Latin America all highlight the pervasive regional challenges, whether political, security related or economic and social. Regional challenges call for regional solutions.

“Regional cooperation can be a means of employing preventive diplomacy and for promoting conflict resolution,” he added. “You have already shown great foresight by constructively supporting the democratization process and encouraging political stability in your member State of Myanmar, which will chair ASEAN next year,” said the President.

The meeting “noted with satisfaction” the continued dialogue and consultation between the secretariats of the two organizations and encouraged them to further enhance their cooperation, coordination and liaison functions, according to a news release issued afterwards.

Among other things, the meeting also exchanged views on regional and international matters of common concern to ASEAN and the UN, including the situation in Syria, the Middle East peace process, disarmament, conflict prevention, disaster management, and sustainable development.

Secretary-General Ban Ki-moon also participated in the meeting, which was chaired by Prince Mohamed Bolkiah, Minister of Foreign Affairs and Trade of Brunei Darussalam.

♦ Receive daily updates directly in your inbox - Subscribe here to a topic.
♦ Download the UN News app for your iOS or Android devices.
southeast+asian 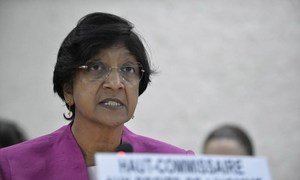 The United Nations human rights chief today welcomed the renewed commitment by leaders of the Association of Southeast Asian Nations (ASEAN) to universal human rights norms – but expressed concern that the regional body’s recently-adopted human rights declaration, the region’s first, retains language that is not consistent with international standards.