The United Nations and its partners today called for urgent action to assist some 4.6 million people with humanitarian needs in the Central African Republic (CAR).

“There is a real opportunity for the international community to make a difference in the CAR,” said UN Emergency Relief Coordinator Valerie Amos during a high-level meeting held during the 68th session of the General Assembly in New York.

“We must invest in stability and recovery now. Failure to act will prolong and exacerbate the appalling conditions people are enduring and lead to additional threats to peace and security in this very fragile region.”

Participants at the meeting stressed that a significant increase in humanitarian funding was essential, and that a rapid improvement in security was a precondition for getting urgently-needed assistance to the worst-affected people.

The recent fighting has further eroded even the most basic services in the country and exacerbated an already dire humanitarian situation affecting the entire population of 4.6 million people, half of whom are children. Currently, 1.6 million people are in need of assistance, including food, protection, health care, water, sanitation and shelter.

“The conflict in the Central African Republic has created a desperate humanitarian crisis in a country where people already face a daily struggle to feed themselves,” said European Union Commissioner Kristalina Georgieva. “There are consequences for the region as a whole. The CAR is at the centre of an immensely fragile region of Africa. Neighbouring countries all have a stake in what is happening in the CAR.”

Ms. Georgieva said the CAR has been the world’s most forgotten emergency, and expressed hope that the international community is “finally waking up to a crisis which has been ignored for too long.” 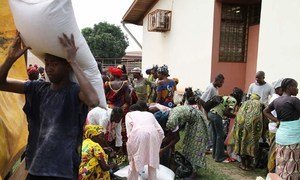 The United Nations food relief agency is reopening its offices in the northern parts of the country and using mobile teams to reach some of the 500,000 people estimated to be in dire need of aid in the Central African Republic (CAR), as fresh fighting in the northwest is displacing more families.