25 September 2013
With the spotlight today on anti-poverty goals at the United Nations Headquarters in New York, the Prime Minister of Italy called for greater local and global action to overcome food insecurity.

With the spotlight today on anti-poverty goals at the United Nations Headquarters in New York, the Prime Minister of Italy called for greater local and global action to overcome food insecurity.

Addressing the 68th General Assembly’s General Debate, Prime Minister Enrico Letta noted that the eight anti-poverty targets known as the Millennium Development Goals (MDGs) have made “tangible improvements” but that one in eight people worldwide still suffer from malnutrition.

“Food Security should be a priority area of action,” he said in reference to the Debate’s theme ‘Post-2015 Development Agenda: Setting the stage!’

The theme incorporates some of today’s most crucial issues: a sustainable relationship between consumption and production, energy efficiency, and more, he added.

More than 130 countries are planning to participate Expo 2015 in Milan on the theme ‘Feeding the planet: Energy for life’ to exchange best practices between public and private sectors on global sustainability in the area of food security and nutrition.

In addition, the UN Food and Agricultural Organization (FAO) and the UN World Food Programme (WFP) are based in Rome.

“Italy feels that the time has come to launch a new global consensus on food,” said Mr. Letta.

In his statement, the Prime Minister also highlighted Italy as a port of entry for hundreds of thousands of migrants, stressing the country’s respect for fundamental human rights and international law, while also fostering international cooperation with countries of origin and of transit.

The UN is due to host next month in New York a high-level dialogue on migration and development.

Among other topics, Mr. Letta turned to the situation in Syria, reiterating calls for a political solution to the conflict. “At the same time, we strongly condemn what has taken place in Syria. We cannot be indifferent before blatant violations of fundamental international norms,” he stressed.

Mr. Letta is one of scores of leaders to speak at the annual General Assembly session at which heads of State and Government and other high-level officials will present their views and comments on issues of individual national and international relevance. 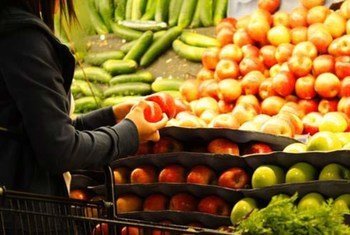