Lauding recent progress, Ban urges Israelis and Palestinians to forge ahead towards peace

Secretary-General Ban Ki-moon today stressed the need for Israeli and Palestinian leaders to build on recent progress and for the international community to assist them in forging a way forward in the peace process.

“We must do all we can to save the two-State solution. If we truly believe in that solution, we must also recognize that the window for achieving it is closing fast,” Mr. Ban said at the meeting of the Ad Hoc Liaison Committee, which was chaired by Norway.

“The more we defer the tough decisions, the likelier it is that dire predictions become dreadful reality. Complacency only breeds more conflict,” he told the 12-member body that serves as the principal policy-level coordination mechanism for development assistance to the Palestinians.

“While we desperately need steps that feed the hunger for economic progress, we are especially starved for leadership – statesmanship – the recognition of the two peoples’ shared fates and interests.”

Today’s meeting takes place on the margins of the annual United Nations high-level debate, and comes ahead of a meeting of the diplomatic grouping known as the Quartet – which comprises the UN, European Union, Russia and the United States – slated for this week.

Mr. Ban, who last month visited the region to lend UN support to the peace process, said today’s meeting comes amid renewed hope. “Though many challenges remain, the resumption of negotiations is a step in the right direction. As the talks continue, it is crucial to make visible progress on the ground to foster badly needed trust,” he stated.

“The situation is volatile, and the status quo in the occupied Palestinian territory is not sustainable. In the long run, the occupation is deeply damaging to both Israelis and Palestinians. I am extremely concerned that without political progress, there could be dire consequences for both peoples.”

Mr. Ban said he hoped the meeting will point the way towards increased Palestinian and Israeli economic cooperation, an easing of restrictions on access and movement of Palestinians, and tangible improvements in both the West Bank and Gaza. “Such positive measures would mutually reinforce each other and usefully complement the political track.”

The parties themselves bear the primary responsibility to make the most of the current opening, he noted. “Both should act responsibly and with restraint, and refrain from incitement and other actions that risk undermining the negotiations or prejudging final status issues. Stability is critical, and maximum efforts should be made to avoid violence and reverse negative trends.

“The international community, for its part, must work in concert, including through the Quartet, to assist the parties in forging a way forward.” 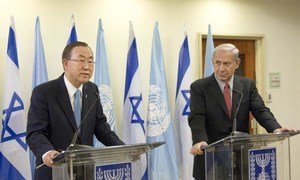 Secretary-General Ban Ki-moon today, on a visit to Jerusalem, stressed his full support for direct negotiations between Israelis and Palestinians, and voiced the hope that this year will be a decisive one for peace in the Middle East.