Guy Oliver/IRIN
A member of the Armed Forces of the Philippines (AFP) at a checkpoint on the streets of Cotabato.
25 September 2013

The situation in Zamboanga City in the southern Philippines is now a humanitarian crisis, as tens of thousands of people remain forcibly displaced, the United Nations said today, calling for support to the victims of the recent wave of violence in the country.

“We are increasingly alarmed by the situation and the growing needs of people caught up with violence,” said the UN Resident and Humanitarian Coordinator in the Philippines, Luiza Carvalho. “We are particularly concerned for the most vulnerable, especially the well-being of women and children.”

Earlier this month, armed clashes erupted between Government forces and non-State actors in Zamboanga City. Some 132 people have died as a result of the standoff and the UN Office for the Coordination of Humanitarian Affairs (OCHA) estimates that some 158,000 people have been affected by the violence and more than 10,000 homes have been destroyed. In addition, over 109,000 people are now displaced in Zamboanga City and nearly 19,000 are displaced in the Basilan province.

Ms. Carvalho expressed concern over the plight of those displaced, many of whom are struggling to survive. Some 70,000 people are currently staying in the main sports complex in Zamboanga City in overcrowded conditions and insufficient sanitation facilities. OCHA warned there is a real risk of a disease outbreak and an urgent need for food, drinking water, health services, cooking utensils, tents and other necessities.

“We are particularly concerned that aid is delivered in an impartial manner, with the needs of the most vulnerable met and those outside the evacuation centres not forgotten,” Ms. Carvalho said.

“We expect that all humanitarian workers providing support to the victims of violence are protected and respected, and their safety is ensured by all actors.”

She also reiterated OCHA’s commitment to the humanitarian response as well as its support for Government efforts to respond and provide assistance to civilians. 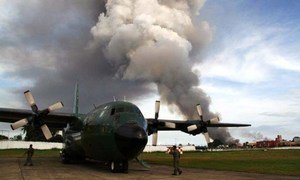 A senior United Nations official in the Philippines, on behalf of the UN humanitarian team and its partners, today called for an immediate end to the latest violence and said the team is ready to support the Government in delivering humanitarian aid to people affected by the armed clashes.