24 September 2013
Gender equality, democracy and free trade are vital for human and economic development as the United Nations seeks to set the stage for the a new battle against poverty and its attendant ills in the decades ahead, Swedish Prime Minister Fredrik Reinfeldt told the General Assembly today.

Gender equality, democracy and free trade are vital for human and economic development as the United Nations seeks to set the stage for the a new battle against poverty and its attendant ills in the decades ahead, Swedish Prime Minister Fredrik Reinfeldt told the General Assembly today.

“These areas have the capacity to influence developments in many other areas at the same time,” he said on the first day of this year’s General Debate, stressing the prime role the UN has to play in achieving the anti-poverty Millennium Development Goals (MDGs) and their successor targets, the post-2015 development agenda, which is the theme of the 68th General Assembly.

The post-2015 agenda aims to set the stage for sustainable development in the decades after the expiry of the 15-year MDGs cycle that seeks to slash extreme hunger and poverty, boost access to health care and education, achieve gender equality and environmental stability, and reduce maternal and child mortality and the incidence of HIV/AIDS, all by the end of 2015.

“It is our firm belief that by ensuring gender equality you also improve a country's productivity, economy and rule of law,” Mr. Reinfeldt said, noting that every year, 1 billion women are subject to sexual or physical violence, every day 800 women die from preventable complications related to pregnancy and childbirth, and legal restrictions prevent women from owning property in many countries while many girls and women are refused access to schools and education.

“Educating girls and women leads directly to an increase in a country's economic output,” he stressed. “Educated mothers place higher value on schooling their own children. Closing the gap between male and female employment rates increases a country's GDP (gross domestic product) substantially.”

On democracy, Mr. Reinfeldt said democratic governance was key to achieving sustainable development, noting that almost one third of the world's population lives under authoritarian rule – “a serious barrier to development.”

“Only when people can freely express their political opinion - and freely participate in a thriving civil society - can they truly participate in the life of their community,” he declared. “This applies also to freedom on the Internet. Only with functioning courts do people feel safe to make investments and develop their businesses.

On free trade and competition he said protectionism is very expensive, raising prices and lowering standards of living. “Let me illustrate this by a striking example,” he added. “According to the World Trade Organization, consumers and Governments in rich countries pay $350 billion per year supporting agriculture - enough to fly their 41 million dairy cows first class around the world.”

In other examples, he noted that when competition has been introduced for mobile phone companies in some countries, the cost of calls has fallen 30 to 50 per cent, while studies show that lowering services barriers by one third would raise developing countries' incomes by around $60 billion.

“And let us also remember how important trade is for peaceful relations,” he added. “To put it very simply, no sales person wants to start a war against a country where it has customers. That would be a bad business strategy. Trade enables peace.”

Yesterday, UN Secretary-General Ban Ki-moon met with Mr. Reinfeldt, and, according to a readout issued by a UN spokesperson, the two discussed the conflict in Syria and the importance of a political solution.

The Secretary-General thanked Sweden for its contributions to supporting UN humanitarian aid efforts in Syria, including through a generous response to the refugee crisis, and for the critical assistance provided to the work of the UN chemical weapons inspection team.

The Secretary-General and Prime Minister Reinfeldt also exchanged views on preparations for the post-2015 development agenda and the importance of addressing the challenges of climate change. The readout said that the two officials underscored the importance of the resumption of negotiations to reach a comprehensive settlement in Cyprus.

One of scores of leaders to speak at the annual General Assembly session, Mr. Reinfeldt joins heads of State and Government and other high-level officials to present views and comments on issues of individual national and international relevance. The General Debate began today and wraps up on 1 October. 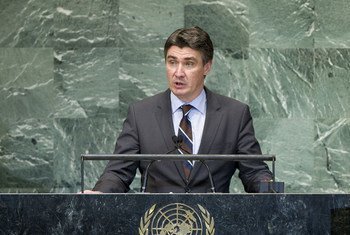 28 September 2012
Croatia’s Prime Minister, Austria’s Vice-Chancellor and Sweden’s Foreign Affairs Minister lamented the lack of unity in the United Nations Security Council over the conflict in Syria as they addressed the UN General Assembly today, while Ireland’s Deputy Prime Minister joined those speakers in speaking out on the need for strong human rights protections.