In her speech to the United Nations General Assembly today, the President of Argentina stressed that regulating the financial markets is a human rights issue.

President Cristina Fernandez said that having a home, job, hope and dignity are fundamental rights, and that citizens become repeated victims of speculators and financial lobbies.

“We see millions of unemployed in the world, a situation similar to what Argentina went through in 2001,” lamented the Argentinean President.

“We have been serial victims of lobbyists, of vulture funds, of those who bought bonds at knockdown prices, and that is the story of Argentina; but in a short time, it could be the story of any other country,” she added.

Turning to the conflict in Syria, the President noted that a large majority of Syrians have died in attacks by conventional weapons.

“They have killed more than 150,000 people and 99.9 per cent of those people have died by conventional weapons, not chemical weapons,” Ms. Fernandez said.

She recalled that at the most recent G20 summit in St. Petersburg, Russia, the question arose as to what difference it made if a person was killed by shrapnel, landmine, missile, grenade or chemical weapons.

“There are not just wars; only peace is fair,” noted Ms. Fernandez.

Stressing the lack of action from the Security Council to reach a political settlement to the Syria crisis, Ms. Fernandez recalled that Argentina held the Council’s rotating presidency during the month of August.

While chairing the Security Council thematic debate on cooperation between the UN and regional organizations on 6 August, Ms. Fernandez said she proposed reforming the 15-member body so that its decisions would be taken by consensus without the possibility of a veto.

Finally, she said she hoped that the new Government in Iran would cooperate with Argentina in relation to the clarification of the attack on the Asociación Mutual Israelita Argentina (AMIA) in Buenos Aires in 1994.

Ms. Fernandez is one of scores of leaders to speak at the annual General Assembly session at which heads of State and Government and other high-level officials will present their views and comments on issues of individual national and international relevance. 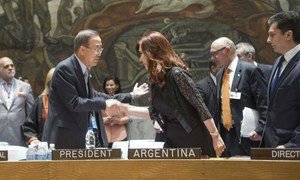