24 September 2013
In his address to the United Nations General Assembly’s high-level debate today, the President of Paraguay highlighted the importance of education and stressed that opportunities, not hand-outs, helped countries achieve progress in a dignified manner.

In his address to the United Nations General Assembly’s high-level debate today, the President of Paraguay highlighted the importance of education and stressed that opportunities, not hand-outs, helped countries achieve progress in a dignified manner.

“Education is the key,” President Horacio Manuel Cartes Jara said. He is one of a host of leaders to speak at the annual General Assembly session at which heads of State and Government and other high-level officials will present their views and comments on issues of individual national and international relevance. The debate runs in New York through 1 October.

“The central issue is the quality of learning as a means of overcoming the geopolitical constraint of backwardness and a lack of opportunity, he added referring to Paraguay’s geographic location as a land-locked country.

He noted that improving the quantity and quality of education is a fundamental premise of his new Government, which would lead to a longer-term goal of development and opportunity for Paraguayans and internationals alike.

“The new rules that govern the world therefore represent an access to the ocean of development for my country,” Mr. Cartes concluded.

On behalf of Paraguay, he asked the international community for “opportunities to achieve progress in a dignified manner, not for hand-outs.”

He added that his country wanted to “work and study and truly become a land of opportunity, of investment and prosperity, with security, formality, reliability and foreseeability.”

Today’s speech is the first time that Mr. Cartes, who was elected last month, participated in the high-level General Assembly debate.

He said the 21 April election process represents a “new direction,” where Paraguayans freely altered from one political party to another for only the second consecutive time in more than 200 years.

Among his other priorities, he said, is poverty alleviation: “It is incomprehensible that a nation so rich in resources has so many poor.”

He pledged that “no quarter will be given” in the fight to reduce the country’s poverty indicators as much as possible in the shortest time possible. “Things are going to improve, and not merely through assistance, but also by ensuring human dignity,” Mr. Cartes said.

Poverty alleviation is one of the eight Millennium Development Goals (MDGs) due to top tomorrow’s discussion at the Debate, along with plans for a post-2015 sustainable development agenda. 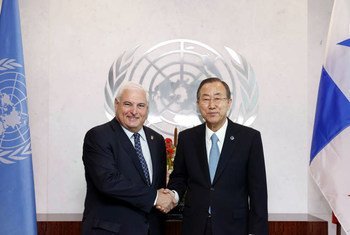 22 September 2013
Amidst the 1,000 days of accelerated action to reach the eight anti-poverty targets known as the Millennium Development Goals (MDGs), Secretary-General Ban Ki-moon today met with leaders of two Latin American countries to discuss ways to speed up progress.