Concerned at delay, Ban says Maldives run-off vote should be held as soon as possible

Secretary-General Ban Ki-moon today voiced his concern at the decision by the Supreme Court in the Maldives to postpone the second round of the presidential election and said the run-off should be held as soon as possible.

“These are pivotal elections for reaffirming the democratic process in the Maldives,” said a statement issued by Mr. Ban’s spokesperson. “The people of the Maldives have exhibited great patience and should have the opportunity, without undue delay, to exercise their vote.”

The first round of the presidential election, held on 7 September, had been widely recognized as a success by international and domestic election observers. The second round was scheduled for 28 September.

The current election is seen as an important step in the country’s democratic transition. The Maldives underwent a regime change in 2012, when the previous democratically-elected president, Mohamed Nasheed, resigned in contested circumstances. He was succeeded by his former deputy, Mohammed Waheed Hassan.

Mr. Ban reiterated that it is “of the utmost importance” that the will of the people be respected in deciding the future of the country.

“The Secretary-General urges all Maldivians to exercise restraint, renew their commitment to the Constitutions and work toward conducive conditions for peaceful, credible run-off polls to take place as soon as possible,” the statement added. 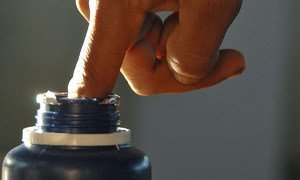 Secretary-General Ban Ki-moon today urged all political leaders in the Maldives to live up to their responsibilities and respect the democratic process in the second round of the presidential election on 28 September.