24 September 2013
The international community must intensify its efforts to end the Syrian crisis and other conflicts in the Middle East, maintaining that the region’s transformations will shape global conditions well into the future, the King of Jordan told other world leaders gathered at the United Nations General Assembly today.

The international community must intensify its efforts to end the Syrian crisis and other conflicts in the Middle East, maintaining that the region’s transformations will shape global conditions well into the future, the King of Jordan told other world leaders gathered at the United Nations General Assembly today.

“Our region can be, must be, a House of Peace and Prosperity: With strong pillars of good governance and wide-open doors to opportunity, especially for our young people. This is Jordan's blueprint, and we are not alone,” King Abdullah II said.

“But no house can be built when its city is burning,” he added. “And today, the region's fires cannot be ignored. All the world is in their path. To protect the future, our world must respond.”

In Syria, he said, it is time to fast-track a political transition to end the bloodshed, neutralize the threat of chemical weapons, restore security and stability, preserve the unity and territorial integrity of the country and engage all Syrians in building their nation’s future.

He noted that the flow of refugees in his country already equals one-tenth of Jordan’s population and could reach one million – or 20 per cent of the population soon. “These are not just numbers; they are people, who need food, water, shelter, sanitation, electricity, health care, and more.”

Jordanians had opened their arms to those in need, he said. “But I say here and now that my people cannot be asked to shoulder the burden of what is a regional and global challenge,” he stressed.

While acknowledging that international donors had been generous to date, he said, however, more was urgently needed and the world must be resolute that the Syrian parties “abide by international humanitarian law and principles, and allow humanitarian access, into and within Syria, to reach those in need.”

He said that the international community must also work together for a speedy resolution of what he called the region's core crisis, the Palestinian-Israeli conflict, which, he said, “consumes resources that are needed to build a better future, and feeds the flames of extremism around the world.”

Commending the Israeli and Palestinian leadership for deciding to resume final status negotiations, he said that recent talks show that progress can be made with willing parties, determined United States leadership and strong regional and international backing.

He urged the parties to remain committed and warned against actions that would derail fragile progress toward a two-state settlement based on international legitimacy and the Arab Peace Initiative.

The way forward for region and the whole world, he concluded, depended on mutual respect and concern for the well-being of all.

“With every country that is more prosperous and free, with every neighbourhood that is safer, with every person who has more reason to hope, the entire House of Humanity grows more secure,” he said.

Earlier today, King Abdullah met with UN Secretary-General Ban Ki-moon, who, according to information provided by Mr. Ban’s spokesperson, expressed deep gratitude for Jordan’s generosity toward Syrian refugees and recognized the need for further support from the international community.

Mr. Ban and King Abdullah also discussed efforts toward the resumption of Israeli-Palestinian peace talks as well as UN efforts in the field of sustainable development and climate change, the spokesman said. 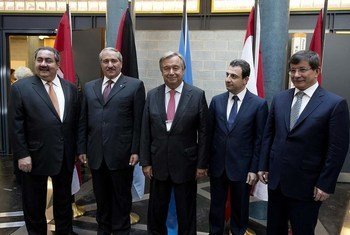 4 September 2013
The United Nations refugee agency and senior Government ministers from Iraq, Jordan, Lebanon and Turkey – countries which together host more than 1.7 million Syrian refugees - called today on the international community to “overcome differences” to stop the fighting in Syria, as the made an urgent appeal for expanded assistance to the region.