24 September 2013
In his speech to the United Nations General Assembly’s high-level debate today, the President of Mozambique, Armando Emílio Guebuza, called for international support to some of the hotspots in Africa, noting that development can only occur in a climate of peace and security.

In his speech to the United Nations General Assembly’s high-level debate today, the President of Mozambique, Armando Emílio Guebuza, called for international support to some of the hotspots in Africa, noting that development can only occur in a climate of peace and security.

In his statement, President Guebuza told world leaders who gathered for the debate, which started today, that “in seeking solutions for the conflicts in different parts of the world, the multilateral approach based on the principles of the UN Charter must prevail.”

Mr. Guebuza urged international support for Madagascar, which established the dates for the presidential and legislative elections, creating an “opportunity for the conclusion of the political transition process” in the country.

Turning to the Democratic Republic of the Congo (DRC), Mr. Guebuza said stability in the country remains a challenge for the entire region.

He appealed to the Congolese actors to conclude the Kampala talks led by Uganda, and reiterated to all signatories of the Regional Oversight Mechanism of the Peace, Security and Cooperation Framework for the DRC and the region to “honour the tenets of this agreement.”

Mr. Guebuza also called for steadfast commitment to the stability of Guinea-Bissau within the framework of the Chairmanship of the Community of Portuguese Speaking Countries (CPLP), of which Mozambique is a member.

“We would like to reiterate our appeal to the international community to continue to mobilize needed resources to carry out elections, and above all, to strengthen state institutions,” he said.

The President of Mozambique, whose country last August concluded its mandate as Chair of the South African Development Community (SADC), also called for a lifting of sanctions on Zimbabwe following “successful elections” validated by State institutions and endorsed by the SADC and the African Union.

Turning to the theme of this year’s debate, the Millennium Development Goals (MDGs) and the post-2015 sustainable agenda for the years once their deadline is reached, Mr. Guebuza urged the establishment of an agenda based on principles of inclusion, national ownership and shared responsibility.

“In carrying out this agenda, it is important that we extirpate from our vocabulary and from our attitude the dichotomy that attempts to group the members of the United Nations family to which we all belong in two categories: the generous and the deprived people,” Mr. Guebuza urged.

He noted that as the General Assembly continues along its 1,000 days of accelerated action to meet the MDGs, “the inability of a State to meet its development targets conceived and agreed upon in this Magnificent House represents a collective failure of the entire international community.”

Mozambique had participated in the discussion process about priorities for a post-2015 agenda by hosting national consultations with civil society representatives.

In May, Secretary-General Ban Ki-moon participated at one of the roundtable events in Maputo, pledging UN support to assist Mozambique in progressing towards the targets.

The nation has made progress in getting most children early schooling, providing its population with access to water and sanitation, and boosting women’s participation in the Government, where 40 per cent of parliamentarians are women.

However, more than half the population is below the national poverty line, more than 40 per cent of children are stunted or undernourished, and HIV/AIDS is still a major challenge, among other issues.

In his statement, Mr. Guebuza also highlighted the country’s commitment to furthering democracy, particularly ahead of the 20 November municipal elections.

In reference to disarmament, Mozambique will host next June the Third International Conference to Review the Convention on the Elimination of Anti-Personal Mines, Mr. Guebuza said, inviting participants to the Conference.

Among other topics noted in his speech, Mr. Guebuza reiterated his country’s support for a two-State solution the Middle East, and urged the lifting of the economic, trade and financial embargo against Cuba. 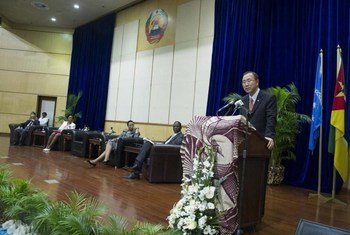