24 September 2013
The top United Nations official in Somalia today urged the international community to redouble its efforts to help defeat militant groups in the country, including Al-Shabaab, which reportedly claimed responsibility for last weekend’s terrorist attack in neighbouring Kenya.

At a press briefing in Geneva, the Special Representative of the Secretary-General for Somalia, Nicholas Kay, strongly condemned the attack in Nairobi and expressed condolences to the families of the victims.

According to media reports, some 62 people died and more than 170 were injured during the siege of Kenya’s largest shopping mall, the Westgate. Islamist Al-Shabaab insurgents reportedly launched the attack in response to Kenya sending troops to Somalia to fight the group.

Mr. Kay stressed that security remains the main challenge in Somalia, and called on the international community to support Somali national forces in addressing threats posed by militant groups, adding that they represent not just a national but an international threat.

“None of the progress that we are making in Somalia, in terms of political and institution capacity building, none of that progress will succeed unless the security challenges are met. Security remains the number one challenge and controlling and defeating Al-Shabaab is key to this,” Mr. Kay said. “The Westgate attacks show that the threat from Al-Shabaab is international […] the ideology and the terrorist intent respects no borders.”

Mr. Kay called for an intensified campaign to defeat the group, and said it had to be three-dimensional: military, political and practical. He added that he would request more resources, in particular for the African Union Mission in Somalia (AMISOM), which is in need of helicopters, armed vehicles, and potentially more troops.

The envoy emphasized that an extra investment in Somalia should be seen as very small in comparison to what had been spent in other countries, such as Afghanistan, Iraq or Mali. The price of walking away would be far higher, he said.

“There are plenty of challenges still outstanding but there are many grounds for a cautious optimism,” said Mr. Kay, who heads the UN Assistance Mission in Somalia (UNSOM). “Despite this tragedy, and despite this murderous deadly intent shown by Al-Shabaab, in Somalia we have at the moment the best opportunity we have had for a generation to assist that country return to peace and eventual prosperity.”

Somalia has been torn asunder by factional fighting since 1991 but has recently made progress towards stability. In 2011, Al-Shabaab insurgents retreated from Mogadishu and last year new Government institutions emerged, as the country ended a transitional phase toward setting up a permanent, democratically-elected Government. 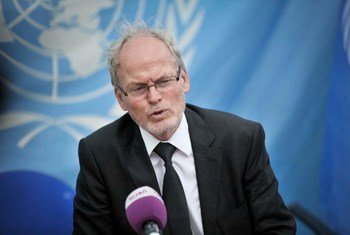