DPI (file photo)
Judges, Rodney Leon and the "Ark of Return," the winning design for the Permanent Memorial in Honour of the Victims of Slavery and the Transatlantic Slave Trade.
23 September 2013

A Manhattan-based architect of Haitian descent was today announced as the winner of an international competition to design a memorial that will be permanently on display at United Nations Headquarters in New York to honour victims of slavery and the transatlantic slave trade.

Unveiling Rodney Leon’s ‘Ark of Return’, Secretary-General Ban Ki-moon said the memorial “will serve as a reminder of the bravery of those slaves, abolitionists and unsung heroes who managed to rise up against an oppressive system, fight for their freedom and end the practice.”

The ceremony, held on the eve of the General Assembly’s annual debate, was also attended by the President of the body’s 68th session, John Ashe, who commended all participants in the competition for “being a voice of change and hope” whose ability to create meaningful artwork “deepens our faith in human goodness and decency, and for this, we are all grateful.”

The piece by Mr. Leon, a designer and architect of the African Burial Ground National Monument in lower Manhattan, features a “symbolic spiritual space and object where one can interact and pass through for acknowledgement, contemplation, meditation, reflection, healing, education and transformation,” according to its creator.

Mr. Leon’s work was selected from among 310 design proposals from 83 countries in a competition launched two years ago by the UN Educational, Scientific and Cultural Organization (UNESCO), with support from the UN Department of Public Information’s Remember Slavery Programme, and Member States from the Caribbean Community (CARICOM) and the African Union. Jamaica, as the Chairman of the Permanent Memorial Committee, was represented at today’s event by Prime Minister Portia Simpson Miller.

UNECO Director-General Irina Bokova, who also participated, said she was “moved” to be participating in the event given she just returned from Haiti where the memory of slavery and the slave trade carries precious significance not just of suffering but also of “victorious fight from oppression for freedom”.

The design had to be created around the theme of “Acknowledging the Tragedy; Considering the legacy; Lest we forget”. It was to be not only a symbol, but part of an educational process in memory of slavery and the transatlantic slave trade, and to architecturally embody each affected region of the transatlantic slave trade – Africa, the Caribbean, Europe, and the Americas.

It also had to artistically complement to the landscape of the UN Headquarters, described by UNESCO as “an iconic site that will deepen, both visually and spiritually, the visitor’s experience of this important environment.”

80 Million Beats of the Heart

The winning design was unanimously chosen by a committee of five international judges who met at UN Headquarters in August. Ahead of the judging, they spoke with UN Television about how their decisions were shaped.

Ashfar Isahq is the Chairman of the International Children’s Art Foundation. He said he founded the organization to harness children’s imagination for positive change.

“At the end of the day, I and my work with children means that I have to look at an inner voice that tells me that this is what children and future generations will like,” Mr. Isahq said. “I listen to that inner voice to make my selection.”

Curator and artist Dominique Fontaine said she was looking for a certain aesthetic value, one “that will appeal to the viewer.”

From New York University, Michael Gomez, a professor of History and Middle Eastern and Islamic Studies who specializes in the African Diaspora, said he was primarily interested in identifying a piece that spoke directly to the experience of the transatlantic slave trade and the significance of that trade.

“I was interested in finding a project that would in some way give expression to that experience, and would allow those who would visit the memorial to have a good sense of what that experience was about and its ongoing implication for various societies,” Mr. Gomez told UN Producer, Mary Ferreira.

Meanwhile, David Boxer, a former curator at the National Gallery of Jamaica said the real challenge for him was to find a piece that both spoke to the tragedy itself – which he said required a memorial in a “more traditional sense” – and something that is inspirational.

Completing the jury, Nadia Bakhurji, and architect, women’s empowerment advocate and former Board Member of Saudi Council of Engineers, said she knew the winning design right away.

“I had emotional reactions to some of the sculptures and I knew which one would be the right one because it has to be the one that will really inspire thought provoking ideas, make you step back and say – oh my God, is that really what happened and how can we prevent that from happening again,” Ms. Bakhurji said.

She added that she was also looking for a design that bridged educational and spiritual experiences.

The judges made their unanimous selection after meeting with each of the seven finalists, each of whom also spoke with UN Television ahead of their presentations.

The winner, Mr. Leon, said the competition was “a once in the lifetime opportunity to do something which is going to last generations and has had an impact on so many people’s lives, not only spiritually and emotionally but also in an educational capacity, as well.”

Hanxi Wang, an architectural student from China who submitted ‘Untitled’, said just getting to the finalist stage, after being one of 16 shortlisted artists, was “already incredible.”

Carlo Gandolfi, an architect from Italy, worked with Paola Passeri, Alessandra Ripa, and Monica Sachetti to create ‘The Wounded Earth.’

“We put a lot of effort into this project,” Mr. Gandolfi said ahead of entering the board room where the jury was waiting for a presentation of the design.

Pertti Kukkonen, a Finnish sculptor was straightforward about his aspirations for the design, ‘80 Million Beats of the Heart’. “I want to win this,” Mr. Kukkonen said. “This is maybe one of the most interesting days in my life.”

From France, the team of Pierre Laurent and Nicolas Grun said they were nervous “but in a good way” ahead of the judging.

“It’s normal to be nervous because there is a lot going on behind this project,” Mr. Laurent told UNTV. “We would like the jury to understand and capture what we have done. So that’s why we are nervous, but in a good way.”

The final contestant, Jaime Catelanos, a Colombian-French architect, whose piece “Palenque” features what look like orange metal slabs, said he was nervous but, “I think I will forget very quickly - the panic - as we call it.”

All designs aimed to honour the more than 15 million men, women and children who were victimized in the transatlantic slave trade for over 400 years, and created the largest forced migration in history. 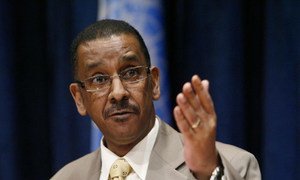 UN launches competition to design memorial to victims of slavery

The committee tasked with building a permanent memorial at the United Nations to honour the victims of slavery and the transatlantic slave trade today launched a global competition for the design of the structure to remind the world that millions of Africans were violently removed from their homelands, abused and robbed of their dignity.