23 September 2013
A top United Nations official focusing on the Democratic Republic of the Congo (DRC) today highlighted the need for continued regional cooperation to ensure implementation of a Great Lakes peace accord and to combat the activities of all armed groups that have violated the rights of civilians throughout the region.

“We are going to see a real difference. Armed groups will not be allowed to continue with this terrible situation, where families live in fear and people are displaced,” the Special Envoy of the Secretary-General to the Great Lakes Region, Mary Robinson, told reporters in New York following a meeting leaders from the region.

Held on the margins of the 68th session of the General Assembly, the meeting of the Regional Oversight Mechanism of the Peace, Security and Cooperation Framework for the DRC and the region sought to review developments in the region and progress in the implementation of the Framework, which Mrs. Robinson has called “a framework of hope.”

Today’s meeting culminated in the adoption by the participants of a communiqué which strongly condemned the resumption of hostilities by the M23, which have resulted in numerous civilian casualties and caused extensive damage in the occupied areas and in the city of Goma, including the repeated attacks against the Armed Forces of the DRC (FARDC), the peacekeepers of the United Nations Stabilization Mission in the Congo (MONUSCO) and the humanitarian workers.

The M23 – composed of soldiers who mutinied from the DRC national army in April – along with other armed groups – has clashed repeatedly with the DRC national forces. In the past year, the fighting has displaced more than 100,000 people, exacerbating an ongoing humanitarian crisis in the region which includes 2.6 million internally displaced persons and 6.4 million in need of food and emergency aid.

The communiqué condemned the shelling on the territory of Rwanda. It further condemned all negative forces, including the Mayi Mayi, the Democratic Liberation Forces of Rwanda (FDLR), the National Army for the Liberation of Uganda (NALU) and the Allied Democratic Forces (ADF), “the latest action of the latter having led to continuing massive internal displacements and flow of refugees.”

Among other elements of the communiqué, the participants appealed to international development partners to work towards the provision of immediate peace dividends on the ground, through quick impact projects at local and regional levels targeting, in particular, women and youth as well as through other relevant projects of the ICGLR and the Economic Community of the Great Lakes Region (CEPGL).

“We welcomed the establishment of a multi-country multi-donor Trust Fund to support the implementation of priority programs and projects and urged the Special Envoy to use her good offices to promote and gather international support for the implementation of the Framework, said the communiqué.

“Today was a very positive day for the region, with an extraordinarily committed meeting of Heads of State co-chaired by the Secretary-General and the chairperson for the African Union,” Ms. Robinson said. “Each Head of State speaking – and vice-presidents and ministers of their countries – spoke with a firm conviction that the region has to move forward.”

Ms. Robinson added that parties should seek to build on today’s positive atmosphere and continue to work together to implement the Framework. Signed earlier this year by the DRC along with 10 other countries and four regional and international institutions under UN auspices, the Framework outlines a comprehensive approach to sustainable peace in the region.

Secretary-General Ban Ki-moon, acting as co-chair of the earlier meeting, appealed to the region’s leaders to boost resources to end the violence in eastern DRC, noting that resources are not keeping up with current needs.

“We are facing a severe strain on our efforts to save lives and alleviate suffering. Hundreds of thousands of people lack much-needed assistance,” he said, adding that addressing the root causes of the conflict is also necessary to stop all violence.

“The first priority must be to address tensions in the region so we can implement the Framework agreement,” he said. “I reiterate my appeal to the international community to support the governments of the region in meeting their commitments in a timely manner with the participation of civil society.” 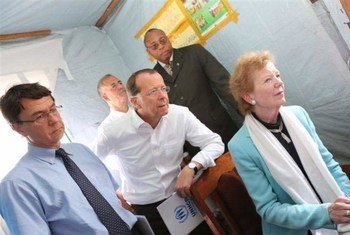 12 September 2013
The Security Council today voiced concern over the security situation in the Democratic Republic of the Congo (DRC) and called on all parties in the Great Lakes region to fulfil their commitment to achieve lasting peace.