Mr. Ban met with President Elbegdorj Tsakhia at the United Nations headquarters in New York ahead of the high-level debate of the General Assembly, due to start on Tuesday.

The UN chief expressed his appreciation for the constructive international role played by Mongolia and its contributions to the Organizations, including to UN peacekeeping, according to a readout of the meeting.

The country was chosen for its efforts to shift towards a green economy in its major economic sectors such as mining and for promoting environmental awareness among youth. According to the UN environmental agency (UNEP), Mongolia faces enormous challenges, including growing pressure on food security, traditional nomadic herding and water supplies as a result of the impacts of climate change.

During the meeting with President Tsakhia, Mr. Ban also “welcomed Mongolia's pioneering role in promoting the needs and issues of landlocked developing countries,” according to a UN spokesperson.

The UN chief also praised Mongolia for its role in promoting democracy.

The two officials also discussed regional cooperation and the denuclearization of the Korean Peninsula.

♦ Receive daily updates directly in your inbox - Subscribe here to a topic.
♦ Download the UN News app for your iOS or Android devices.
Mongolia 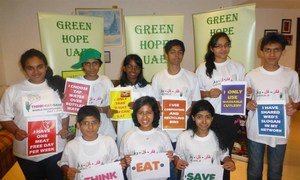 With tons of edible produce squandered each year – never making it from farm to fork – senior United Nations officials are issuing a call on World Environment Day to “reduce your foodprint!,” urging everyone to help curb the massive loss and waste inherent in today’s food systems.