United Nations peacekeeping and a global sustainable development in the years after 2015 were on the agenda during talks today between Secretary-General Ban Ki-moon and Chinese Foreign Minister Wang Yi.

United Nations peacekeeping and a global sustainable development in the years after 2015 were on the agenda during talks today between Secretary-General Ban Ki-moon and Chinese Foreign Minister Wang Yi.

During their meeting at United Nations headquarters, Mr. Ban expressed his appreciation for “China's active leadership role in the United Nations and its contributions to the Organization,” according to a UN spokesperson.

In particular, Mr. Ban thanked China for its support to UN peacekeeping with more than 1,600 Chinese nationals currently serving as police and UN military experts in missions, and thousands others having served.

Most recently, the Government committed to sending engineers, medics and security personnel to the UN mission in Mali known as MINUSMA.

During a visit to Beijing in June, Mr. Ban noted that China provides more peacekeepers to UN missions than all of the four other permanent members of the UN Security Council – France, Russia United Kingdom and United States – combined.

Today's bilateral meeting also focused on the 2015 deadline for achieving the eight anti-poverty targets known as the Millennium Development Goals (MDGs), and on formulating a new development agenda for post-2015. The topic is due to be a focus for the General Assembly high-level debate, which starts at the UN Headquarters in New York on Tuesday.

Mr. Ban and Mr. Wang also discussed climate change and sustainable development. China, one of the world's biggest greenhouse gas emitters along with the US, announced earlier this month that the two nations would cooperate on phasing down production of a group of synthetic chemicals known as Hydrofluorocarbons (HFCs) – in products such as refrigerators and foams.

The two officials also discussed global hotspots, including the crisis in Syria, the denuclearization of the Korean Peninsula, and the situation in Afghanistan.

They also exchanged views on multilateral cooperation in Northeast Asia, according to the UN spokesperson. 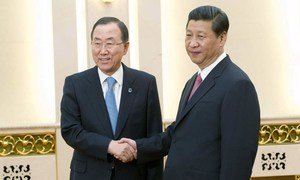 At start of visit to China, UN chief highlights partnership for peace, stability

Meeting with Chinese leaders in Beijing today, Secretary-General Ban Ki-moon discussed a range topics central to the agenda of the United Nations regarding peace and security, human rights and development, as well as the situation in Syria and the Korean peninsula.