Secretary-General Ban Ki-moon and the Security Council have condemned the terrorist attack at a shopping mall in the Kenyan capital, Nairobi, which killed scores of people and wounded many more.

Secretary-General Ban Ki-moon and the Security Council have condemned the terrorist attack at a shopping mall in Kenya's capital, Nairobi, which killed scores of people and wounded many more.

“This premeditated act, targeting defenceless civilians, is totally reprehensible,” Mr. Ban said in a late night statement from his spokesperson.

“The United Nations stands in solidarity with the Kenyan people at this time,” Mr. Ban noted.

In a separate statement, UN Security Council members condemned the terrorist attack "in the strongest possible terms" and reiterated their determination to combat all forms of terrorism in accordance with their responsibilities under the UN Charter.

Mr. Ban and the 15-member Security Council extended their condolences to the families of those killed, and to President Uhuru Kenyatta, with whom the UN chief spoke by telephone earlier in the day.

Mr. Ban has said he trusts that those responsible for the attack will be brought to justice. 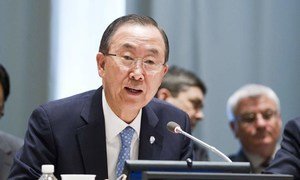 UN chief 'following closely and with alarm' the attack in Nairobi

Secretary-General Ban Ki-moon has spoken with Kenyan President Uhuru Kenyatta about today's attack on a shopping centre in the capital city of Nairobi.