20 September 2013
“Predictable and sustained” international support for Afghanistan will be critical as the country proceeds with its transition, prepares to hold elections next year and international forces draw down by the end of 2014, United Nations Deputy Secretary-General Jan Eliasson said today.

“In a period of uncertainty, the Afghans must know that they will not be abandoned or forgotten by the international community. Predictable and sustained support will send that important signal,” Mr. Eliasson told a meeting at UN Headquarters of the International Contact Group on Afghanistan.

The Group, which comprises more than 50 States and organizations, meets three times a year. Today’s meeting, convened by the Group’s Chairman, Ambassador Michael Koch of Germany, focused on preparations for next year’s presidential elections as well as the role of the UN beyond 2014, when the International Security Assistance Force (ISAF) is expected to leave.

“Credible elections,” said Mr. Eliasson, “will give Afghans confidence in the future of their country, and help lay the foundations for further progress for security, reconciliation and development.”

Elections will also be a major test of the capability of Afghan forces to plan and provide inclusive countrywide security during this crucial period, and can contribute to creating the conditions for progress.

As for the UN’s future role, Mr. Eliasson said the world body is committed to a long-term partnership “in line with the wishes of the Government and the people of Afghanistan.”

“How our partnership evolves to best meet Afghanistan’s priorities and needs is the subject of our ongoing dialogue,” he stated.

Mr. Koch said the intention of today’s meeting was to highlight the “absolutely crucial” role that the UN and its many components have played since 2001, since the effort to create a new Afghanistan was launched.

It was to highlight this role, commend the UN for the wonderful work that it has undertaken on behalf of the people of Afghanistan, and, perhaps most importantly, to launch a debate on what this role should be like once ISAF is drawn down, he told a news conference after the meeting.

The Group also heard an extensive briefing by the Afghan Independent Election Commission (IEC) on “the state of play there,” he added, and discussed ways in which the international community can help to make them “the best elections possible.”

Ershad Ahmadi, Deputy Foreign Minister of Afghanistan, told reporters that the country is in a “very critical and decisive stage” as it continues to move forward in the transition. “The decisions that we are facing now will have wide-ranging implications for long-term peace and security,” he stated.

“In this context, it is rather important to make sure that the international community stays engaged and focused on the priorities that we are dealing with and continue to support Afghanistan as we move towards the future.” 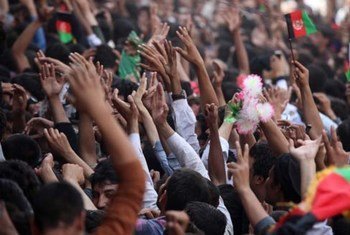 19 September 2013
Citing Afghans’ “exuberant” display of national unity and pride at the war-wracked country’s victory in a regional football championship as a “welcome sign” on the gradual path to normalcy, the top United Nations envoy there today also pointed to other recent political and security gains despite major challenges.