UN Photo/Paulo Filgueiras
Daniela Bas, Director of the Division for Social Policy and Development at the UN Department of Economic and Social Affairs (UN-DESA).
20 September 2013

“This is a group of the society too long considered a vulnerable group of society in need of help, while on the contrary, this is a resourceful group of society that can contribute in an enormous way to development,” said Daniela Bas, Director of the Division for Social Policy and Development at the UN Department of Economic and Social Affairs (UN-DESA).

The General Assembly will convene on Monday at UN Headquarters in New York the first of its kind High-level Meeting on Realization of the Millennium Development Goals and other Internationally agreed Development Goals (MDGs) for Persons with Disabilities, focused on ‘The way forward: a disability inclusive development agenda towards 2015 and beyond.’

The meeting will result in an action-oriented outcome document supporting the aims of the Convention on the Rights of Persons with Disabilities (CRPD) and the achievement of the eight anti-poverty targets known MDGs, and the sustainable development agenda beyond their completion in 2015.

The meeting is being organized with participation of the UN Children’s Fund (UNICEF), UN World Health Organization (WHO) and other UN agencies, funds and programmes, as well as Member States and civil society.

He noted that people with disabilities are three times more likely to be denied adequate healthcare, and that half of all disabled people are likely to suffer unexpected health expenditure that puts them and their families in poverty.

Monday’s meeting will also address the importance of reaching children with disabilities during humanitarian responses and natural disasters, the Senior Adviser on Children with Disabilities at UNICEF, Rosangela Berman Bieler.

She told the story of Fareeda who, during an emergency, was offered a wheelchair by several organizations, but none checked to see if she wanted to go to school, if she had food, or housing.

In May, UNICEF devoted its ‘State of the World’s Children 2013’ to children with disabilities.

The report’s underlying message is that girls and boys with disabilities “are not problems” but sisters, brothers, daughters, sons and friends with favourite foods and songs, dreams and rights. Eschewing a focus on traditional notions of “rescuing” the child, the report instead spotlights investment in removing the barriers that impede the realization of a child’s rights.

Among its key recommendations, UNICEF urges countries that have not yet done so to ratify and implement the CRPD and the Convention on the Rights of the Child (CRD).

There are currently 127 countries and the European Union that have ratified the CPBD – these States Parties are required to promote full equality and participation of persons with disabilities in society – and 76 which have signed the CRD. 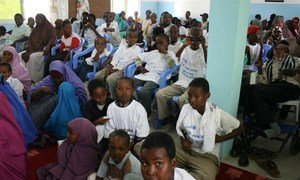