WFP/Herve Serefio
Food rations being handed out at this WFP distribution centre on the grounds of the community hospital in Bangui, Central African Republic.

20 September 2013
The United Nations food relief agency is reopening its offices in the northern parts of the country and using mobile teams to reach some of the 500,000 people estimated to be in dire need of aid in the Central African Republic (CAR), as fresh fighting in the northwest is displacing more families.

Wrapping up a two-day visit to the country, UN World Food Programme (WFP) Regional Director for West Africa, Denise Brown, said the UN agency is committed to scaling up operations, “The presence of the international humanitarian community in CAR in full force is extremely important.”

Speaking at UN Headquarters in New York today, UN Under-Secretary-General for Humanitarian Affairs and Emergency Relief Coordinator Valerie Amos said she hoped a high-level meeting on CAR being held next week on the margins of the General Assembly’s General Debate would provide the political and financial support for relief aid and rebuilding the country’s institutions.

“We have seen over the last couple of weeks, increased violence, a lot of people being killed but we thought there was an opportunity given how fragile the country had become for the international community to really make a difference,” she added.

Security incidents are still reported in the capital, Bangui, and across the country, and crime remains a major threat with the humanitarian community increasingly a target of looting and attacks by armed groups, according to WFP.

During the visit, Ms. Brown met with beneficiaries some 400 km northwest of the capital Bangui. She spoke to displaced people, many of them women, who had walked for days with their children in search of a safe place, leaving everything behind.

“We are at a critical time in the country when support is immediately required,” Ms. Brown said, also highlighting the need to access areas of insecurity.

In meetings with President Michel Djotodia, Prime Minister Nicolas Tiangaye, and members of the transitional government, WFP said that Ms. Brown stressed security guarantees for WFP and its partners so they can safely carry out food assistance programmes.

Brown also met Special Representative of the Secretary-General, Babacar Gaye, and with Humanitarian Coordinator Kaarina Immonen and partners to underscore the importance of the international community’s involvement, as well as education as priorities for CAR.

Staring next month, the UN agency said it plans to provide emergency school meals at schools that will reconvene. Many will remain closed and teachers are absent due to security reasons.

“The first day of school is around the corner. We have got to get the children back in school but we need security and conditions that allow parents to send their children to school in confidence” said Ms. Brown. “We need to do more, invest in education and nutrition and jump start the economy in this country”.

In Bossangoa, some 300 km northwest of Bangui, an inter-agency mission with the UN Office of Coordination of Humanitarian Affairs (OCHA), UN Children’s Agency (UNICEF), UN Population Fund (UNFPA), WFP and partners arrives to asses the extent of the displacement.

“People they met spoke of multiple abuses by both sides in the conflict, including murder, rape, and torture,” UNHCR spokesperson Adrian Edwards told journalists in Geneva.

He said heavy clashes had been reported between Saturday and Tuesday between unidentified armed groups around Bossangoa and Bossemblele, 150 km northwest of Bangui.

“People told us that those who returned to their villages had to flee again, and spoke of arbitrary arrests, kidnappings, extortion and illegal taxation by armed men,” the UNHCR spokesperson said.

The fighting appears to have subsided but situation remains tense, according to the UN agency.

It continues to provide aid kits consisting of tarpaulins, blankets, sleeping mats, kitchen sets, jerry cans, buckets, soap and hygienic kits to women and girls in the area, as part of distribution to some 3,000 recently uprooted people. 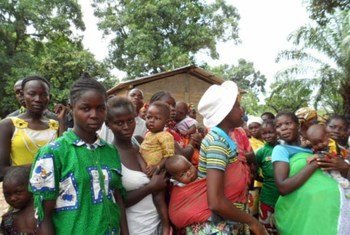 30 August 2013
The United Nations food relief agency is helping thousands of people displaced by increasing violence perpetrated by armed groups in the Central African Republic (CAR), according to its spokesperson.