OCHA/D. Palanivelu
Over half of Syrian refugees in Lebanon are children.
17 September 2013

The United Nations issued an urgent appeal to the world today to make up a huge shortfall in funding for the humanitarian crisis spawned by Syria’s civil war, specifically warning that hundreds of thousands of Syrian refugees in Lebanon could face reductions in vital food aid.

“We have raised just 40 per cent of the $4.4 billion needed for Syria and neighbouring countries for this year,” Secretary-General Ban Ki-moon told the 68th General Assembly on its opening day in a briefing on Syria. “I call on Governments to help us meet this unprecedented crisis while still meeting their commitments to other emergencies.”

Over 100,000 Syrians have been killed, more than 2 million have fled to neighbouring countries and a further 4 million have been internally displaced since fighting began in March 2011 between the Government and opposition groups seeking to oust President Bashar Al-Assad.

Mr. Ban called the situation “desperate” in a briefing largely devoted to the findings of a UN report that Sarin gas was used in a chemical attack that reportedly killed hundreds of people on the outskirts of Damascus last month.

Specifically outlining the severe consequences of the funding shortfall, UN agencies called for greater generosity to avert a cutback in food aid next month for hundreds of thousands of Syrian refugees in Lebanon, where $127 million still needs to be raised.

Some 720,000 Syrians have so far poured into Lebanon, fleeing the civil war raging in their own country, while the funding for Lebanon is only 27 per cent covered, UN High Commissioner for Refugees (UNHCR) spokesperson Melissa Fleming told a news briefing in Geneva, citing the needs of the UN World Food Programme (WFP).

If the UN had the means, many more needs could be addressed, but if the current trend continued, there would need to be prioritization, she said when asked about reports that the UN would cut down aid to Syrian refugees in Lebanon as of 1 October.

Those most vulnerable, those in greatest needs and those unable to support themselves in any way would need to be put first, she added. There were some refugees who had absolutely nothing, no recourse to work and no relatives or support system in Lebanon.

Meanwhile, the WFP reported today that it has extended its distribution of food vouchers to Syrian refugees in Jordan to 100,000 more people, living in Zaatari camp. The scheme substitutes vouchers for direct food delivery, allowing refugees to buy the food of their choice from designated shops inside the camp while allowing the local economy to benefit.

In August, WFP reached more than 300,000 Syrian refugees living in Jordan through vouchers, injecting over $11 million into the Jordanian economy.

“By involving Jordanian community organizations to set up the shops and ensuring supplies are sourced from local traders, the voucher system also helps to support the towns and villages around the camp and boost the local economy,” WFP Emergency Coordinator in Jordan, Jonathan Campbell said in the capital, Amman.

For an introductory period refugees in Zaatari will receive a voucher in addition to the regular WFP monthly ration of bulgur wheat, pasta, rice, lentils, sugar and salt so that they have time to familiarize themselves with this new form of assistance, gradually increasing the value of the voucher while reducing the food commodities until the camp is aided entirely through the voucher system.

“I haven’t had eggs for a long time,” said Sawsan, a mother of five children, from Dara’a, who fled the conflict a year ago. “I can now buy milk and cheese,” she added as she entered one of the shops, crowded with refugees eager to use their new vouchers.

WFP also uses food vouchers for Syrian refugees in Lebanon, Turkey, Iraq and Egypt, and local economies have received over $153 million since the beginning of 2013 through the system.

In the part of his briefing devoted to the use of Sarin gas in Syria, Mr. Ban repeated the remarks he made yesterday on presenting the report. “The United Nations Mission has now confirmed, unequivocally and objectively, that chemical weapons have been used in Syria,” he said. “The facts speak for themselves. This is the most significant confirmed use of chemical weapons against civilians since Saddam Hussein used them in Halabja in 1988.

“This is a war crime and a grave violation of the 1925 Protocol and other rules of customary international law. I trust all can join me in condemning this despicable crime,” he added, calling for an end to arms flows to Syria, “which only sustain the bloodshed.” 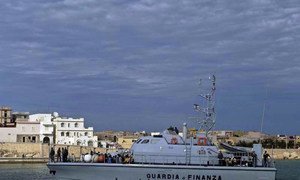 The United Nations will allocate $50 million to bolster the efforts of agencies assisting the growing number of Syrians affected inside the country and throughout the region, the largest ever contribution to support coordinated response to a single country, according to the world body’s humanitarian arm.