17 September 2013
As the General Assembly prepares to kick-off its 68th session later today , Secretary-General Ban Ki-moon stressed the need for global cooperation to tackle the world’s most pressing issues including the crises in Syria and elsewhere, beyond conflict, accelerating achievement of the Millennium Development Goals (MDGs).

“This is a crucial period for global cooperation. Syria is the biggest peace, security and humanitarian challenge we face. Let us be clear: the use of chemical weapons in Syria is only the tip of the iceberg,” Mr. Ban told reporters in New York. “Next week, as world leaders gather here, I will make a strong appeal to Member States for action now.”

Mr. Ban said that at next week’s General Assembly annual debate, which will be attended by some 130 Heads of State as well as foreign ministers, he would call on world leaders to “uphold their political and moral responsibilities to serve, to listen, to invest, to respond to the rising and justifiable demands of people across the world for lives of freedom and prosperity.”

“We have a full agenda. But the events of the past days have shown once again the power of the United Nations to uncover the facts – to resolve differences – to help avoid bloodshed and forge consensus for peace and progress,” he said. “We must harness that spirit for action to address our immediate crises and achieve our longer-term goals.”

Mr. Ban said that issues that will require urgent attention include climate change, boosting efforts to accelerate the achievement of the MDGs and the shaping of the post-2015 development agenda.

“The situation in Afghanistan, Egypt, Mali and the Central African Republic will also be high on the agenda, as we assess new approaches we are taking in peacekeeping, diplomacy and support for countries in transition.”

The Middle East diplomatic Quartet – comprised of the UN, the European Union, Russia and the United States – will also meet for the first time in more than a year to support the resumed Israeli-Palestinian negotiations.

In addition, the General Assembly will this year hold a high-level session on disabilities and development, and Mr. Ban stressed the importance of taking the needs and aspirations of people with disabilities – who make up 15 per cent of the global population – into account.

“The next week or two will bring many opportunities for common progress. But success will depend on ever deeper levels of cooperation – and contributions from our partners,” Mr. Ban said.

“I will meet with as many world leaders as I can. I am determined to pack a lot into these encounters. We have much to discuss.”

Responding to questions about the crisis in Syria, the Secretary-General said he was encouraged by the framework agreement reached between United States Secretary of State John Kerry and Russian Foreign Minister Sergey Lavrov on dealing with Syria’s chemical weapons.

“I hope that that spirit of very friendly negotiations on the basis of good rapport, according to their expressions, will really help forge unity among the Security Council and address all these issues on an urgent basis by adopting a Security Council resolution, which can really be […] enforceable,” he continued, adding that the agreement should be translated into action as “there is not much time to lose.”

Indeed, it is sad that the international community has been unable to help the Syrian people to enjoy their genuine freedom and peace during the last two-and-a-half years. The findings by Dr. Åke Sellström’s regarding the use of chemical weapons in Syria on 21 August are “indisputable and overwhelming” and based on scientific facts.

“Therefore, we must not take the “business as usual” [approach]. I sincerely hope that Russia and the United States demonstrate their leadership at this time, particularly the countries of the permanent members of the Security Council,” Mr. Ban said.

He went on to say that he hoped the Council took action quickly because, “while we welcome the belated accession by the Syrian Government to the Chemical Weapons Convention, there are many obligations [which] must be implemented.” 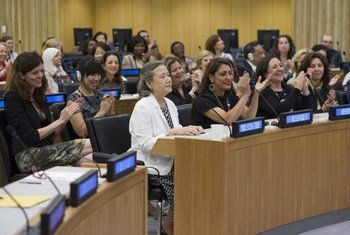 13 September 2013
Ahead of next week’s opening of a new General Assembly session, Secretary-General Ban Ki-moon detailed an agenda for Member States that includes achieving the anti-poverty targets known as the Millennium Development Goals (MDGs), shaping a shared vision for a universal sustainable development agenda and reaching a legally binding agreement on climate change.