17 September 2013
Efforts for renewed peace prospects in the Middle East should not be neglected amid the turmoil elsewhere in the neighbourhood, the top United Nations envoy in the region told the Security Council today, while also urging both Israelis and Palestinians to act responsibly and avoid actions that risk undermining the prospects for resumed negotiations.

“The negotiating teams have been engaged in several rounds of talks and we encourage both sides to accelerate and intensify their discussions,” UN Special Coordinator for the Middle East Peace Process Robert Serry said in his briefing to the 15-member body.

He noted that the international community has long supported the vision of a two-State solution and now has a responsibility to give these efforts a chance. “But the onus to sustain an enabling environment lies with the parties. Both should refrain from actions that risk undermining the prospects on negotiations.

“And we urge them to act responsibly and with restraint,” Mr. Serry added. “Concurrently, any substantial political initiative must yield early dividends in the immediate period ahead with tangible improvements to security and socio-economic conditions for Israelis and Palestinians alike.”

In this regard, he welcomed a recent Israeli Government decision to increase the number of work permits for West Bank Palestinians by 5,000, and said he looked forward to further steps of economic cooperation and easing restrictions on access and movement of Palestinians.

At the same time, he noted that settlement activity continued in the West Bank and in East Jerusalem and reiterated that such actions are “counterproductive.” Clashes between Palestinians and settlers also continued and reports of settler attacks against Palestinian farmers are “particularly worrisome,” he said.

“We do not underestimate the challenges ahead and the momentous efforts required to sustain and successfully conclude negotiations within the prescribed timeframe,” said Mr. Serry, who noted that two decades have now passed since the signing of the Oslo Accords.

“And yet, 20 years of peace efforts have also demonstrated that fair, reasonable and legitimate solutions can be found for the key issues dividing the parties. It is for the negotiators to identify and narrow these gaps, and for their leaders to take decisions in the best interest of their peoples. And the international community, including key regional stakeholders, must now show unity and resolve in assisting the parties in moving forward.”

Secretary-General Ban Ki-moon, Mr. Serry noted, looks forward to productive meetings later this month of the diplomatic Quartet, which comprises the European Union, Russia, UN and United States, and of the Ad Hoc Liaison Committee, which deals with development assistance to the Palestinian people, as well as to constructive debate during this year’s General Assembly.

“Words are critical in preparing the ground for peace,” stressed Mr. Serry. “Both leaders are soon to address the General Assembly and we sincerely hope they take the opportunity to reach out to each other’s people in making the case for peace.” 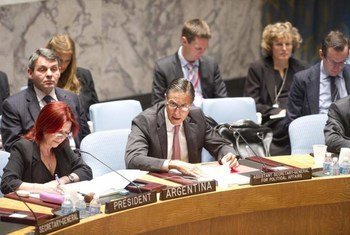 20 August 2013
Israeli and Palestinian negotiators met today for a second round of direct talks in the Middle East, a senior United Nations official told the Security Council, pledging the Organization’s support for this “small but important opening for peace” which also could have a positive impact on regional stability.