The two and a half-year conflict in Syria has made persons with disabilities extremely vulnerable to gross rights violations on a daily basis, a United Nations committee said today, stressing the need for greater protection of their rights.

“Living in the midst of conflict is physically and emotionally distressing, but all the more so for persons with disabilities who face the same if not greater barriers in times of armed conflict,” said the UN Committee on the Rights of Persons with Disabilities (CRPD), which is composed of 18 independent human rights experts.

“They and their families often struggle to get the support and to access the services they need,” the CRPD members said. “They are too often the forgotten victims of conflict.”

Syria is a State Party to the Convention on the Rights of Persons with Disabilities. Under article 11 of the Convention, parties are obliged under international humanitarian and human rights law to take all necessary measures to ensure the protection and safety of persons with disabilities in situations of risk, including armed conflict.

The Committee, which monitors the Convention, said it is vital that humanitarian agencies are allowed to operate without restrictions throughout Syria to assist both persons that had disabilities prior to the conflict, as well as those who acquired them as a result of the violence.

The experts also voiced grave concern about the plight of persons with disabilities who have fled the fighting and are now in refugee camps in neighbouring countries.

“Refugees have faced extreme emotional upheaval, and the stress of being displaced is often all the greater in the case of persons with disabilities,” they said. “However many persons with disabilities have been affected by the Syrian conflict, there is clearly a large number of refugees and internally displaced persons who are disproportionately at risk of being neglected, excluded or even abused because of their impairments and traumas, particularly the most vulnerable women and children with disabilities.”

The Committee added that as the humanitarian emergency response increases in the region, it is essential that there are protection and assistance programmes for all to guarantee access to minimum standards of treatment.

Since fighting began in March 2011 between the Syrian Government and opposition groups seeking to oust President Bashar Al-Assad as many as 100,000 people have been killed, more than 2 million have fled to neighbouring countries and a further 4 million have been internally displaced. In addition, at least 6.8 million Syrian require urgent humanitarian assistance, half of whom are children. 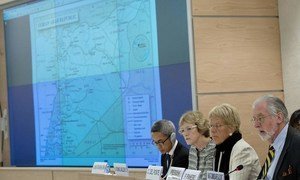 The vast majority of Syrians are killed in unlawful attacks using conventional weapons such as guns and mortars, with children making up a large proportion of the casualties, the United Nations-appointed human rights probe today reported, calling for a halt to weapons being supplied to Government and the rebels.