UNSMIL
Libyan women queue up to vote on election day in July 2012.

15 September 2013
This year's International Day of Democracy falls amid volatile political transitions in several countries, prolonged economic crisis, and dramatic demographic and social change, United Nations Secretary-General Ban Ki-moon said today, stressing that such events all underscore the need to strengthen people's voices in how they are governed — an imperative that lies at the heart of democracy.

“Despite advances in civic engagement, apathy has become democracy's most insidious enemy in a growing number of societies,” the UN chief said in his message on the Day, commemorated each year on 15 September.

“Inclusive participation is the antidote,” he said, underscoring that such inclusivity is not only an end in itself; it prepares communities, societies and entire countries to address opposing points of view, forge compromises and solutions, and engage in constructive criticism and deliberations.

“We live in a new era of ever greater possibilities for individuals to obtain information and influence decision-making, facilitated by evolving technologies,” he said, noting that they can help people to play a more direct role in areas he considers the most immediate global priorities for our age: reducing inequalities; preventing armed conflict and building a safer and more secure world; supporting nations in transition; empowering women and young people; and advancing sustainable development.

As the international community strives to accelerate progress on attaining the Millennium Development Goals (MDGs) by the target date of 2015, the United Nations is shaping a vision for development beyond that year.

Global consultations on the post-2015 development agenda — in themselves an unprecedented effort to bring people's voices to international policy-making — have re-affirmed the importance of putting people at the heart of development. The million voices represented in the UN “MY World” survey overwhelmingly call for open and responsive Government, placing this in the top three goals they seek in a future development agenda.

“On this International Day of Democracy, I call on leaders to hear, respect and respond appropriately to the voices of the people, whether expressed directly or through elected representatives,” said Mr. Ban, also calling on the world's citizens to think about how they can use their voices to not only take control of their destiny, but to translate their desires and the desires of others into a better future for all.

“Speak out. Participate. Reach out to understand and listen to those who may be weaker or more vulnerable than you,” he declared, adding: “We all have an equal stake in our shared future. Today, let us commit to ensuring that each of us can and does play our part to the full.”

Democratization is a process, not an event, says Secretary-General Ban 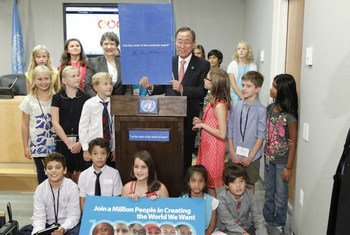 10 September 2013
The voices of more than 1 million people all over the world were gathered to produce a United Nations report launched today that reflects their priorities concerning development issues, which will help Member States shape the post-2015 sustainability agenda.