UNHCR/F. Noy
A customs boat enters a port in southern Italy after searching for boats carrying people hoping to reach Europe. More and more Syrians are taking sea routes to the continent.
13 September 2013

The United Nations will allocate $50 million to bolster the efforts of agencies assisting the growing number of Syrians affected inside the country and throughout the region, the largest ever contribution to support coordinated response to a single country, according to the world body’s humanitarian arm.

“Conditions for Syrians fleeing the conflict in their country get worse by the day. I am releasing $50 million to help United Nations agencies in the region keep pace with the growing demand,” Under-Secretary-General for Humanitarian Affairs and Emergency Relief Coordinator Valerie Amos said about the allocation from the UN Central Emergency Response Fund (CERF).

“The CERF contribution represents a show of solidarity with the people of Syria as the funds come from donors, large and small, across the world,” added Ms. Amos, who recently returned from a visit to the region.

More than one-third of Syrians urgently need humanitarian aid but the crisis is affecting everyone, she said at the time, as the currency has significantly depreciated and essential infrastructure has been destroyed, including health facilities.

The CERF contribution will provide 20 million to support aid operations inside Syria, $15 million to scale up efforts in Lebanon, another $10 million to help the recent influx of Syrian refugees in Iraq, and the remaining $5 million will boost humanitarian programmes in Jordan.

As many as 100,000 people have been killed, more than 2 million have fled to neighbouring countries and a further 4 million have been internally displaced since fighting began in March 2011 between the Syrian Government and opposition groups seeking to oust President Bashar Al-Assad.

Spokesperson Adrian Edwards told journalists in Geneva that 3,300 Syrians, of whom 230 were unaccompanied children, arrived by boat in southern Italy during the previous 40 days, as compared with a total of 670 in the previous week.

Several people needed hospital treatment for dehydration and there had been instances of people being directly airlifted from the boat, he added.

Spokesperson Elisabeth Byrs said as more areas of Syria were becoming inaccessible due to insecurity, the UN agency needed humanitarian access “to avoid a situation in which hunger would become an additional factor that pushed even more people to flee the country.”

Meanwhile, a UN-appointed human rights probe said it has evidence that pro-Government forces deny medical care to those from opposition-controlled and affiliated areas as a matter of policy, according to a note from the Geneva-based Human Rights Council.

In a paper to be presented on Monday and published on Wednesday, the International Commission of Inquiry on Syria is to report that pro-Government forces implement that policy through attacks on medical units, by endangering hospitals, targeting medical personnel and interfering with patients receiving treatment.

The denial of medical care as a weapon of war is a “chilling reality of the war in Syria”, the Human Rights Council said. 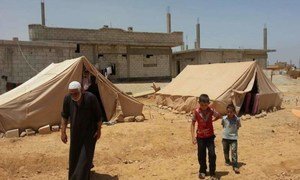 Citing ongoing incidents of murder, rape, torture, widespread attacks on civilians and hostage-taking committed by Syrian forces and anti-Government armed groups, a United Nations-appointed human rights probe reported today that “the perpetrators of these violations and crimes, on all sides, act in defiance of international law. They do not fear accountability.”