“Where we stand is […] precarious. We cannot afford to lessen our focus or investment – despite the many competing claims for our attention in the rest of the world,” said Nicholas Kay, head of the UN Assistance Mission in Somalia, as he briefed the Council on the Secretary-General's latest report on the situation in the country.

Before going into some detail on political and security issues he began by answering the question he said that all the Secretary-general's Special Representatives probably hear most: “Are you optimistic?”

“The answer in my case is a resounding “yes,” he said, adding that behind the “twists and turns, the crises and the standoffs”, Somalia has the foundations for progress: the international community is united behind a credible, legitimate federal Government.

“There are resources available to meet the most immediate needs; there is the political will to compromise and manage disputes without resorting to violence. And the Somali people I have met are tired of war and deprivation, fed up with brinkmanship and predatory politics,” said Mr. Kay.

He said that the core of Somalia's political challenge is simple to describe, “even if rather difficult to solve.” After 22 years of conflict, power and control of resources and revenue have fragmented. The strong centralist state has ceased to exist. Different regions and different people now hold different bits of power, he said, adding: “That's why Somalis have decided a federal model is the only system that will work in this new reality.”

Mr. Kay said that the task now is for Somalis to reconcile and agree among themselves exactly how federalism will work in practice. “How will they share power, revenue, resources and responsibilities in a way that benefits all Somalia? These are difficult issues: but ones which need political solutions,” he said.

That is why in his first three months, he prioritized the need for progress on the Constitutional review and constructive engagement with the regions; travelling to Puntland, Somaliland and engaging closely on the Jubba question.

He went on to tell the Council that the situation in the Jubba regions was one of the most serious issues to face the Federal Government. In early June, the risks were very high of a collapse in security and political stalemate in Kismayo, as well as between the Jubba parties and Mogadishu.

“However, an agreement was finally reached on 28 August in Addis Ababa, under the active mediation of Ethiopian Foreign Minister Dr Tedros Andhanom on behalf of IGAD, which set out interim governance, security and economic arrangements,” he said.

To the north, the relationship between Somaliland and Somalia remains sensitive and fragile. Nevertheless, he said, there is progress to report. With the mediation of Turkey, the two parties have had two sessions of talks this year. The agreement on shared management of airspace could be a model for other areas of mutually beneficial cooperation. “We urge both sides to focus on solutions, however modest, not problems,” said Mr. Kay.

As for other progress he said that in less than a week, another key building block of Somalia's stabilization will be put in place as some 200 delegates will gather in Brussels on September 16, hosted jointly by the European Union and the Federal Government.

“The New Deal Compact is a Somali-led and Somali-owned set of priorities, milestones to achieve them, making an architecture for international support to Somalia, coordination and funding,” he said, but stressed that the true test of the Compact will be in how it makes a difference in peoples' daily lives. “The UN in Somalia will play its part to the full, especially in assisting the Government to coordinate international assistance,” he said.

Finally, he said that in terms of rebuilding a shattered state and rescuing millions of people from conflict and poverty, “we are standing on the very edge of great success.” But, Mr. Kay urged the Council to remain vigilant, stressing that the “crisis” was far from over. “If we fail and Somalia slips back and Al Shabaab prevail, we shall feel the security impact from Bamako to Bangui, and beyond Africa. Their ideology respects no borders.”

To get over the threshold and achieve great things, “we need more,” he continued, stressing that while much had been done, there are three areas in which the international community must boost its efforts: support for the Somali National Security Forces; enhanced capabilities for the African Union Mission in Somalia (AMISOM); and thirdly, an well-resourced and coherent UN role in the exit strategy for AMISOM.

“Working in Somalia is expensive; keeping our staff safe costs real money. Ensuring success will cost more, but not very much compared to what the international community has spent in Iraq, Afghanistan and more recently Mali,” Mr. Kay said. 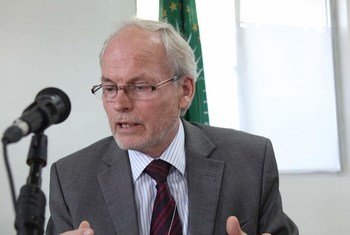 7 September 2013
The top United Nations envoy in Somalia today deplored a terrorist attack in the Somali capital, Mogadishu, which resulted in numerous casualties.