Facilitating access to education for women and girls is vital to lift millions out of poverty and must be a priority for Governments and international organizations, the head of the United Nations entity tasked with advancing gender equality said today.

“Education is one of the founding services that all women and girls need to access in order for us to make a difference,” the Executive Director of the UN Entity for Gender Equity and the Empowerment of Women (UN Women), Phumzile Mlambo-Ngcuka, told reporters during her first press conference in New York. She was appointed in July and took up the post in August.

“Education is the foundation for everything we need to do to succeed,” she stressed, adding that this issue will feature prominently in the entity’s agenda as part of a push to accelerate the achievement of the anti-poverty targets known as the Millennium Development Goals (MDGs).

One of the goals is to ensure that, by 2015, children everywhere, boys and girls alike, will be able to complete a full course of primary schooling.

Ms. Mlambo-Ngcuka, who focused on several of her priorities for UN Women, underlined that it is not only crucial to facilitate access to education for girls but also to reduce the number of girls who drop out of school.

Another key priority will be ensuring women’s reproductive health rights, she said. “I see reproductive health and reproductive rights as an essential building block on which we need to serve the women, and I see economic empowerment as another important layer. Having those layers we can then address poverty and we will be able to lead to women’s emancipation. All of these are integral,” she said.

Working with men and boys is also important as they play an important role in actively fighting for the emancipation of women, she added.

During the press briefing, Ms. Mlambo-Ngcuka noted that while it is important to empower women and have their voices be heard, it is also important strengthen national institutions to better serve women’s needs.

“It is my hope and vision that together, and using the existing agreements as well as conventions, we are at a position where we can be game changers as far as supporting women’s emancipation,” she said.

“Women’s voices need to be heard but the public institutions that we lead need to serve women and women must feel the service that we are bringing to them.”

She added that UN Women will seek to collaborate and coordinate with organizations and institutions within and outside the UN with both the expertise and the resources to do advance women’s interests.

In addition, Ms. Mlambo-Ngcuka said another priority in her agenda will be to increase funding for the entity. UN Women will seek to work with Member States to increase their contributions, as well explore ways to diversify funding sources from the private sector, foundations, philanthropists and individuals, she said. UN Women is currently looking to raise $100 million by the end of 2013. 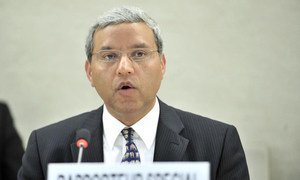 A United Nations independent expert today called on the Cambodian Government to keep moving forward with judiciary, electoral, economic and land reforms, stressing his readiness to assist the country with remaining challenges to implement his recommendations.