The Global Fund to Fight AIDS, Tuberculosis and Malaria
With support from a Global Fund grant, a woman and a child sleep under an insecticide-treated net in Atsapanethong District, Laos.
12 September 2013

The report warns that if global funding for the three infectious diseases were to flatline, it would not only spark severe humanitarian consequences but would triple the $15 billion currently needed to bring the pandemics under control to lifetime treatment costs as high as $47 billion.

This figure is spotlighted in the report, Cost of Inaction, released today by the UN-backed Global Fund to rally world leaders to do more to rein in the threat posed by HIV/AIDS, tuberculosis and malaria during the 2014-2016 period.

“There are three compelling factors that make this a unique opportunity to fight and defeat these diseases,” said Mark Dybul, Executive Director of the Global Fund citing experience, new scientific tools and epidemiological understanding.

“We can make a transformative difference, and if we do not act now, the costs will be staggering,” Mr. Dybul noted, backing the report’s call for full replenishment of the Fund’s resources.

The report was launched earlier today in a special conference call that included Ray Chambers, the UN Secretary General’s Special Envoy on Financing the Health Millennium Development Goals and For Malaria.

As part of the launch of the report, Joanne Carter, Executive Director of RESULTS Educational Fund in the US, called attention to why this 4th replenishment of the Global Fund is so critical: “We are at the tipping point in the fight against HIV, TB and malaria and the ultimate goal we all share to defeat these three diseases is a very real possibility.”

“Besides the humanitarian and moral case for a fully replenished fund, this report makes the undeniable value for money and economic rationale for scale-up, now.”

Without the required funding 2.6 million people would be infected with HIV annually, according to the report.

In addition, three million less people would be treated for TB and one million unnecessarily killed without treatment.

The report points to the cost of $30 per patient to start TB treatment, which can rise to 1,000 times the cost for multi-drug resistant TB in the future.

The report also notes that the consequences for inadequate funding for malaria would be 196,000 lives lost per year and 430 million instances of people having malaria at a cost of $20 billion in lost gross domestic product (GDP). 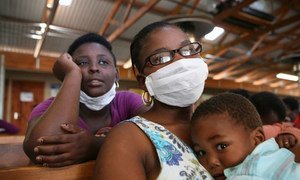 United Nations representatives and international donors today wrapped up discussions on how to finance an estimated $87 billion needed by the UN-backed Global Fund to bring under control the global threat posed by HIV/AIDS, tuberculosis and malaria during the 2014-2016 period.