11 September 2013
More people than ever are living abroad the United Nations today reported, with Asia seeing the largest increase of international migrants over the past decade, and the United States remaining the most popular destination.

New figures from the UN Department of Economic and Social Affairs (UN-DESA) show that 232 million people, or 3.2 per cent of the world’s population, live abroad worldwide, compared with 175 million in 2000 and 154 million in 1990.

In addition, the figures also show a shift since 2000 with South-North and South-South migration at about 82 million international migrants.

“Most international migrants originate in developing country but in recent years they have been settling in almost equal number in developed and developing regions,” John Wilmoth, Director of UN-DESA’s Population Division told journalists in New York. He spoke alongside Bela Hovy, Chief of the Migration Section.

The figures are released ahead of a high-level global summit on migration and development to be held by the General Assembly in New York on 3 and 4 October.

This second high-level dialogue will aim to identifying concrete measures to strengthen coherence and cooperation at all levels, with a view to enhancing the benefits of international migration for migrants and countries alike and its important link to development, while reducing its negative impacts.

“Migration, when governed fairly, can make a very important contribution to social and economic development both in the countries of origin and in the countries of destination,” said Wu Hongbo, UN Under-Secretary-General for Economic and Social Affairs.

“Migration broadens the opportunities available to individuals and is a crucial means of broadening access to resources and reducing poverty.”

Within Europe, Germany and France hosts the largest immigrant communities due to work migration and geographic routes with North Africa.

“New sources and destinations of migrants are emerging, and in some cases, countries have become important points of origin, transit and destination simultaneously,” Mr. Wilmoth said.

Compared to other regions of destination, Asia saw the largest increase of international migrants since 2000, adding some 20 million migrants in 13 years.

This growth was mainly fuelled by the increasing demand for foreign labour in the oil-producing countries of Western Asia and in South-Eastern Asian countries with rapidly growing economies, such as Malaysia, Singapore and Thailand.

The world’s largest corridor of international migration, however, remains between the United States and Mexico, according to the latest figures.

The US gained the largest absolute number of international migrants between 1990 and 2013—nearly 23 million, equal to one million additional migrants per year. 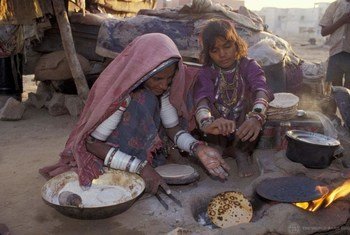 4 September 2013
With more than 215 million migrants around the world, the top United Nations human rights official today reminded Governments that migration is fundamentally about people, and called for the creation of human rights-based policies to more effectively address the issue.