UNHCR/A. Blazy
This family fled from the Syrian town of Qusayr.

11 September 2013
Citing ongoing incidents of murder, rape, torture, widespread attacks on civilians and hostage-taking committed by Syrian forces and anti-Government armed groups, a United Nations-appointed human rights probe reported today that “the perpetrators of these violations and crimes, on all sides, act in defiance of international law. They do not fear accountability.”

Citing ongoing incidents of murder, rape, torture, widespread attacks on civilians and hostage-taking committed by Syrian forces and anti-Government armed groups, a United Nations-appointed human rights probe reported today that “the perpetrators of these violations and crimes, on all sides, act in defiance of international law. They do not fear accountability.”

“Referral to justice is imperative. There is no military solution to this conflict. Those who supply arms create but an illusion of victory,” the International Commission of Inquiry on Syria said in its latest report, delivered to the Geneva-based UN Human Rights Council, stressing that a political solution founded upon tenets of the Geneva communiqué is the “only path to peace”.

The panel, which describes Syria today as “a battlefield [where] massacres are perpetrated with impunity [and] and untold number of Syrians have disappeared,” reports that Government and pro-Government forces in Syria have continued to conduct widespread attacks on the civilian population with impunity, committing murder, torture, rape and enforced disappearance as crimes against humanity, today reported stressing that there is no military solution to the conflict.

“Failure to bring about a political settlement has allowed the conflict not only to deepen in its intransigence but also to widen – expanding to new actors and to new, previously unimaginable crimes.”

Established by the UN Human Rights Council in 2011, the Commission is mandated to investigate and record all violations of international human rights law during the Syria conflict.

The findings produced in today’s report are based on 258 interviews and other evidence collected during the two-month period between 15 May and 15 July 2013.

As for allegations that were received regarding the use of chemical weapons, predominantly by Government forces, the Commission reports that on the evidence currently available, “it was not possible to reach a finding about the chemical agents used, their delivery systems or the perpetrators. Investigations are ongoing.”

The Commission goes on to report that Government forces “committed gross violations of human rights and the war crimes of torture, hostage-taking, murder, execution without due process, rape, attacking protected objects and pillage.”

In reference to the offensive on Al-Qusayr town where the Commission verified that 450 people were killed, “Government forces conducted themselves in flagrant disregard of the distinction between civilians and persons directly participating in hostilities.”

The Commission also noted that there is strong evidence to suggest that the siege on the Al-Qusayr area was imposed to “render the conditions of life unbearable, weakening the armed groups and forcing civilians, who were so able, to flee.”

Pro-Government forces have a legal obligation to allow and facilitate the unimpeded passage of humanitarian relief, the Commission said in its sixth report since it began documenting violations of international law inside Syria in August 2011.

According to the report, the anti-Government forces have committed “war crimes, including murder, execution without due process, torture, hostage-taking and attacking protected objects,” as well as besieging and indiscriminately shelling civilian neighbourhoods.

Anti-Government and Kurdish armed groups have recruited and used child soldiers in hostilities, the report said.

In a statement at a press conference in Geneva, the Commission, led by Paulo Pinheiro, urgently called for a cessation of hostilities and a return to negotiations, leading to a political settlement.

“To elect military action in Syria will not only intensify the suffering inside the country but will also serve to keep such a settlement beyond our collective reach,” stressed the group, which also includes experts Karen Koning AbuZayd, Carla del Ponte and Vitit Muntarbhorn.

The Commission urged a political solution founded upon tenets of the Geneva communiqué of 30 June 2012.

Secretary-General Ban Ki-moon and Joint Special Representative of the UN and the League of Arab States, Lakhdar Brahimi, along with other senior UN officials, have been advocating for a so-called Geneva II meeting, which would include representatives of Syrian parties as well as senior United States, Russian and UN officials.

The goal of the conference would be to achieve a political solution to the conflict through a comprehensive agreement between the Government and the opposition for the full implementation of the communiqué.

The Commission of Inquiry will present this latest report to the Human Rights Council on 16 September. 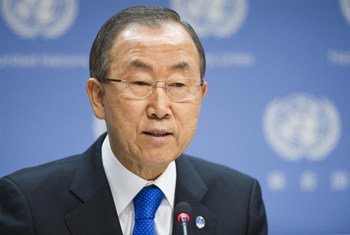 9 September 2013
United Nations Secretary-General Ban Ki-moon today said that two-and-half years of conflict in Syria have produced only “embarrassing paralysis” in the Security Council and that he was considering proposals to the 15-member body in the search for a political solution.