10 September 2013
A United Nations independent expert today urged federal, state and tribal authorities in the United States to take all necessary measures to ensure the wellbeing and human rights of Veronica, a three-year-old Cherokee child at the centre of a highly contentious custody dispute.

“Veronica’s human rights as a child and as member of the Cherokee Nation, an indigenous people, should be fully and adequately considered in the ongoing judicial and administrative proceedings that will determine her future upbringing,” said UN Special Rapporteur on the rights of indigenous peoples, James Anaya.

“The individual and collective rights of all indigenous children, their families and indigenous peoples must be protected throughout the United States,” he added.

At issue is who should raise the child: a South Carolina adoptive couple or the girl’s biological father, who is a member of the Cherokee Nation. The girl’s birth mother, who is not Native American, put Veronica up for adoption while still pregnant.

South Carolina authorities have attempted to force Veronica’s father to release custody of her, charging him with custodial interference for his refusal to do so.

On 3 September, the Oklahoma Supreme Court took up the case, granting a temporary stay of an enforcement order and allowing him to keep Veronica pending further proceedings.

“I urge the relevant authorities, as well as all parties involved in the custody dispute, to ensure the best interests of Veronica, fully taking into account her rights to maintain her cultural identity and to maintain relations with her indigenous family and people,” said the UN Special Rapporteur.

The independent expert pointed out that these rights are guaranteed by various international instruments subscribed to or endorsed by the US, including the International Covenant on Civil and Political Rights, and the UN Declaration on the Rights of Indigenous Peoples.

In his 2012 report on the situation of indigenous peoples in the US, Mr. Anaya noted that the removal and separation of Native American children from indigenous environments is an issue of longstanding and ongoing concern.

“While past practices of removal of Indian children from their families and communities have been partially blunted by passage of the Indian Child Welfare Act in 1978, this law continues to face barriers to its implementation,” Mr. Anaya stated. 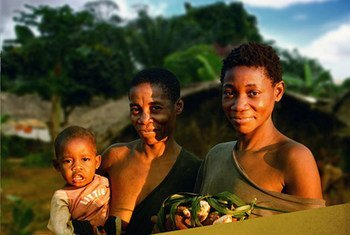 9 August 2013
Marking the International Day of the World’s Indigenous Peoples, United Nations officials today urged governments to honour the treaties and agreements established with their indigenous groups, stressing that respecting official policies is the only way to maintain peace and advance development.