10 September 2013
The United Nations environment agency today welcomed an agreement signed by world leaders at the recent Group of 20 (G20) Summit to reduce the emission of potent greenhouse gases, adding this is a vital contribution in efforts to combat climate change.

During last week's summit in St. Petersburg, Russia, some 35 nations and the European Union agreed to phase down the use of known as hydrofluorocarbons (HFCs), while simultaneously reducing carbon dioxide emissions under the UN Framework Convention on Climate Change (UNFCCC).

“The leaders of the G20 group of nations have provided another positive signal towards the goal of realizing a universal climate agreement by 2015 under the UN climate convention and the ultimate aim of sharply bringing down greenhouse gas emissions in line with the scientific imperative,” said the Executive Director of the UN Environment Programme (UNEP), Achim Steiner.

HFCs are widely used in refrigerators, air conditioners and industrial applications as replacements for ozone-depleting substances being phased out under the UN's universally-ratified Montreal Protocol on Substances that Deplete the Ozone Layer.

“A sense of urgency and a willingness to act down multiple tracks is of the essence,” Mr. Steiner said. “While many countries can point to positive action in respect to emissions and a transition to a low-carbon, resource-efficient and inclusive green economy, the stark reality is that levels of pollution in the atmosphere continue to rise with all the risks to lives, livelihoods and the global economy this entails.”

In the G20 Leaders Declaration, governments reiterated their commitment to fight climate change and said they would support multilateral approaches, including using the expertise and the institutions of the Montreal Protocol, to phase down the production and consumption of HFCs. The Protocol is a UNEP-hosted treaty established to protect the ozone layer by phasing out the production of numerous substances believed to be responsible for ozone depletion.

In a separate agreement at the G20 summit, United States President Barack Obama and Chinese President Xi Jinping agreed to establish a contact group on HFCs under the Montreal Protocol to consider issues related to cost-effectiveness, financial and technology support, safety and environmental benefits.

The decision follows an announcement by both countries in June to cooperate more closely to phase down the production and consumption of HFCs. 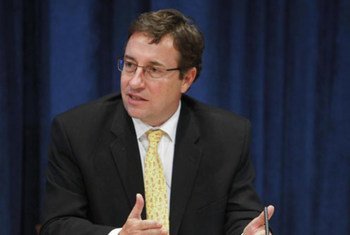 9 June 2013
The head of the United Nations environment agency welcomed today the decision by China and the United States – two of the planet's biggest greenhouse gas emitters - to cooperate on phasing down production of a group of synthetic chemicals in order to combat climate change.