7 September 2013
A top United Nations official focusing on the Democratic Republic of the Congo (DRC) has stressed the need to address impunity in the country, which has seen massive displacement over the past year along with pervasive violence and rights abuses.

“We will not repeat the past mistakes, we believe that there should not be amnesty for those accused of having committed serious crimes, nor should they be integrated in the armed forces of the DRC,” the Special Envoy of the Secretary-General to the Great Lakes Region, Mary Robinson, told reporters in the eastern city of Goma on Friday.

“The international community represented here must contemplate a holistic approach of resolving this conflict, the military approach when necessary and the political approach that can yield a lasting and durable impact for the region.”

Ms. Robinson was in Goma as part of a four-day tour of the region with the Secretary-General's Special Representative in the DRC, Martin Kobler. Boubacar Diarra, Special Representative of the African Union; Koen Vervaeke, European Union Senior Coordinator for the Great Lakes region; and Russ Feingold, US Special Envoy for the African Great Lakes region and the DRC are also taking part in the tour.

Mr. Kobler, who also heads the UN Organization Stabilization Mission in the DRC (MONUSCO), expressed satisfaction at the decision by Heads of State at the Kampala talks in Uganda on Wednesday, to include MONUSCO as a key player in the Joint Verification Mechanism (JVM), which monitors the common borders of the 11 members of the International Conference for the Great Lakes Region (ICGLR).

Mr. Kobler said this would enhance the mechanism's ability to verify and be able to ascertain facts expeditiously.

While in Goma, the envoys were briefed by MONUSCO's Force Intervention Brigade. They also met with the Governor of North Kivu province, visited the Mugunga camp for internally displaced persons (IDPs) on the outskirts of the city, and were briefed on humanitarian issues.

At the conclusion of the visit, they departed Goma for the Rwandan capital of Kigali.

In the past year, the fighting has displaced more than 100,000 people, exacerbating an ongoing humanitarian crisis in the region which includes 2.6 million IDPs and 6.4 million in need of food and emergency aid. 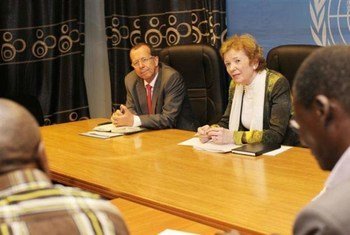 5 September 2013
Top United Nations officials focusing on the Democratic Republic of the Congo are today in the Ugandan capital of Kampala attending talks with regional leaders meant to reenergize peace efforts between the Congolese Government and M23 rebels.