Secretary-General Ban Ki-moon today urged leaders at the Group of 20 (G20) summit in St. Petersburg to explore ways to avoid further militarization of the conflict in Syria and to revitalize the search for a political settlement, warning that “tragic consequences” could follow military action.

Mr. Ban, who has been pushing for a political solution during the summit, said the international community must renew efforts to convene the Geneva conference, which would bring all parties to the negotiating table. He added that a viable political outcome would see the full implementation of the Geneva Communiqué.

Issued after a meeting of the Action Group for Syria in June 2012, the document lays out key steps in a process to end the violence. Among others, it calls for the establishment of a transitional governing body, with full executive powers and made up by members of the present Government and the opposition and other groups, as part of agreed principles and guidelines for a Syrian-led political transition.

“I must warn that ill-considered military action could cause serious and tragic consequences, and with an increased threat of further sectarian violence,” Mr. Ban said in his remarks at the Humanitarian Initiative on Syria, held on the margins of the G20 summit.

“We should explore ways to avoid further militarization of the conflict and revitalize the search for a political settlement instead.”

The Secretary-General also appealed to world leaders to increase support for humanitarian operations in Syria and in its neighbouring countries, which are hosting more than 2 million refugees. He noted that relief operations inside the country are only 44 per cent funded, while the refugee appeal is funded at only 40 per cent.

“No one could have imagined two years ago that Syria would end up in this unending misery. UN staff on the ground report palpable fear as the population fears imminent acceleration and deepening of the conflict,” Mr. Ban said.

“This is a humanitarian crisis of unprecedented proportions in recent history. The world must do everything within its powers to stop the suffering of the Syrian people.”

Despite the difficult conditions on the ground and the limitations to reach all the population in need, UN agencies will remain inside the country to deliver assistance, Mr. Ban said. “Millions are being assisted on a monthly basis and the UN is working hard to ensure equitable distribution on the basis of need, irrespective of whether it is Government or opposition controlled territories.”

The UN Emergency Relief Coordinator Valerie Amos was in Syria yesterday looking at ways of strengthening the Organization’s humanitarian efforts and to support its staff. Mr. Ban said she has had positive meeting with Syrian authorities and humanitarian partners that would hopefully simplify procedures such as obtaining visas for humanitarian workers.

“Relief agencies must be able to reach people in need, wherever they are. We must do more to impress upon all parties their international humanitarian law obligations to protect civilians,” Mr. Ban said.

On the margins the G20, Mr. Ban met with French President Francois Hollande. They were accompanied by the Joint Special Representative of the UN-Arab League for Syria, Lakhdar Brahimi, and the Foreign Minister of France, Laurent Fabius. They discussed the situation in Syria, including the UN chemical weapons investigation. Mr. Brahimi also briefed on efforts to convene the Geneva conference. 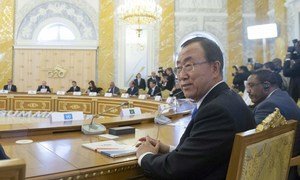 With the world focused on the possible use of chemical weapons in Syria, Secretary-General Ban Ki-moon and the joint United Nations-Arab League Envoy, Lakhdar Brahimi, reiterated to leaders attending the Group of 20 (G20) summit in St. Petersburg the need to “push even harder” for a political solution to end the bloodshed in the war-torn Middle Eastern country.