UN Photo/JC McIlwaine
Amb. Gary Quinlan of Australia and President of the Security Council for the month of September, briefs journalists on the Council’s programme of work for the month.

4 September 2013
With the United Nations Security Council deadlocked over the crisis in Syria, the world’s focus will now shift away from New York to St. Petersburg, Russia, where political leaders gathering for the G20 Summit are expected to address the issue in the hopes of forward movement on the diplomatic front, Australian Ambassador Gary Quinlan told reporters at UN Headquarters today.

Briefing the press on the Security Council’s programme of work for September – Australia will hold the 15-member body’s rotating presidency for the month – Mr. Quinlan fielded numerous questions on the situation in Syria and what action the Council might take to end the bloodshed.

“Everybody is quite transfixed by what we are going to do about this. People are concerned about the UN [chemical weapons] investigation; how it will proceed and how quickly it can get its work done while preserving scientific integrity,” he said.

“But the stalemate among key members of the Council is obvious. The discussion among the P-5 went nowhere,” Mr. Quinlan said, referring to talks UN Secretary-General Ban Ki-moon held late last week with Ambassadors from China, France, Russia, the United Kingdom and the United States – the Council’s permanent members, or P-5 – regarding the work of the UN team that had been collecting samples at sites in the suburbs of Damascus where chemical weapons use has been alleged.

Mr. Quinlan said the Council members had discussed Syria earlier today when they were briefed by Jeffery Feltman, Under Secretary-General for Political Affairs on his recent trip to Egypt and the Middle East. The UN political chief told the Council about ongoing efforts to reach a political solution to the crisis in Syria, including the process towards the holding of the so-called Geneva II conference.

Most of the non-permanent Council members, to the degree Mr. Quinlan felt he could characterize their positions, were very concerned and realized that efforts needed to be made to break the stalemate within the P-5. “The reality is that with the statement, there needs to be a re-energized diplomatic effort,” he said.

As such, he said, the focus has shifted to the G20, particularly with the Secretary-General in attendance, as well as the leadership of the Council’s P-5 membership and other countries. While Syria is not on the G20’s agenda, it was clear the issue would be discussed. “I think most of us have concluded that just for the moment, it would be not be productive or useful to have a Security Council meeting in a formal way because it will go nowhere.”

Continuing, Mr. Quinlan said: “It’s clear that we have to address this at a higher level – a leaders’ level – at the G20. So to answer the question: the council is not abrogating its role, at least not yet, but the geopolitics have shifted” to hoped for talks at the G20.

So far Secretary-General Ban Ki-moon is operating under tight guidelines regarding the scientific process being followed by the chemical weapons team, “but we’re in a little bit of a holding pattern until we see where the leaders take us in the next couple of days.”

Mr. Quinlan said that during their earlier discussion nearly all members of the Council had expressed concern about the humanitarian situation in Syria, especially regarding refugees and internally displaced persons. “Its no secret that a few countries, particularly Luxemburg and Australia, have taken the lead on the matter within the Council” and were pushing to get better and broader humanitarian access.

Those and other countries were also looking for ways to overcome bureaucratic obstacles such as delays for visas and clearances. While the chemical weapons issue was now in the foreground, he said that the Council needed to return to the humanitarian question as quickly as possible “because it is getting worse every day.”

Responding to questions on the situation in the Democratic Republic of the Congo, he noted “the more forward role” the Council has given to the UN Stabilization Mission in the country (MONUSCO) within the framework of civilian protection.

There was now a “reasonable lull” on the military front, but as for addressing such concerns as shelling by M23 rebels into areas of neighbouring Rwanda, the focus has shifted to diplomacy as the International Conference on the Great Lakes region (ICGLR), which would meet on 5 September. He also noted that Special Envoy Mary Robinson was also in the region pressing for progress on the framework for peace and stability.

As for the Council’s programme, he said the 15-nation body had front-loaded much of its work in anticipation of the General Assembly’s annual general debate and high-level activities beginning the week of September 16. The Council planned to hold consultations on Sudan and South Sudan tomorrow. On 10 September it would be briefed on the United Nations Mission in Liberia (UNMIL)

The centrepiece of the Australian presidency would be a Presidential-level debate on small arms, set for 26 September during the Assembly’s general debate. The aim was to have the Council adopt, as an outcome of the meeting, a first-ever resolution on the deleterious impact of small arms and light weapons. 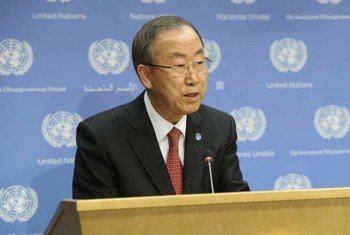 3 September 2013
With the United Nations chemical weapons team working “around the clock” to expedite analyses of samples taken in Syria, Secretary-General Ban Ki-moon today called on Security Council members to unite and develop an appropriate response should allegations regarding the use of such weapons prove true.