UNHCR/Jean-Marc Ferré
High Commissioner for Refugees António Guterres (centre), flanked by the ministers from Turkey, Lebanon, Iraq and Jordan at the start of the 4 September 2013 meeting in Geneva.
4 September 2013

The United Nations refugee agency and senior Government ministers from Iraq, Jordan, Lebanon and Turkey – countries which together host more than 1.7 million Syrian refugees - called today on the international community to “overcome differences” to stop the fighting in Syria, as the made an urgent appeal for expanded assistance to the region.

“We strongly appeal to the international community to overcome existing differences and come together to stop the fighting. All actions that are creating refugee flows need to cease,” the joint statement continued.

The joint statement follows a half-day meeting chaired by Mr. Guterres with representatives of the four countries that host the majority of the 2 million refugees who have fled Syria since March 2011. And additional 4.25 million people are displaced within Syria, according to UN figures.

A ministerial-level meeting is scheduled to be held on 30 September as part of the UN Refugee Agency’s (UNHCR) annual Executive Committee gathering to discuss the Syrian refugee crisis.

The discussions - involving international financial institutions as well as ministerial delegations from Members States, UN agencies and non-governmental organizations - will seek to build consensus for large-scale commitments to combine humanitarian and emergency aid with support for development in the region.

UNHCR and its partners in June appealed to donors for $4.4 billion for Syria relief operations this year, including $3 billion to meet humanitarian and host community needs in the immediate surrounding region. About 40 per cent of this component has been funded.

At the current trend, an average of almost 5,000 Syrians flee into these countries every day, the UN reported, half of them children.

The UN Children’s Fund (UNICEF) today said it was continuing its support Syria, the four countries, as well as neighbouring Egypt.

“We are working on the ground, round the clock with a wide network of dedicated partners to reach Syrian children across the region,” said Maria Calivis, UNICEF’s Regional Director of the Middle East and North Africa.

To meet increasing humanitarian needs, work is on-going to pre-position essential supplies such as bottled water, water tanks and purification tablets and household materials. The UN agency is also supporting children going back to school with bags, materials and classroom furniture. 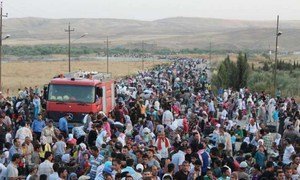 With an estimated 5,000 desperate Syrians fleeing their homes every day, the spiralling violence in the country has now created more than 2 million refugees, the United Nations refugee agency announced today, adding that there is no sign the “humanitarian calamity” will end anytime soon.