US Government
An atmospheric nuclear test conducted by the United States at Enewetak Atoll, Marshall Islands, on 1 November 1952.
4 September 2013

The new head of preparatory commission for a United Nations-backed treaty stressed today that banning nuclear tests is essential for international peace and security.

In a briefing to reporters in New York, the Executive Secretary of the Preparatory Commission for the Comprehensive Nuclear-Test-Ban Treaty Organization (CTBTO), Lassina Zerbo, underlined that countries who have not ratified the treaty should realize the treaty is in their national security interests as well being a vital part of achieving international peace.

“We are indeed working hard day in and day out to try to secure their ratification by building the framework that will give the trust necessary for these countries to understand that the ratification of this treaty is part of their own national security as well as the international peace and security,” Mr. Zerbo said.

Adopted by the General Assembly in 1996, the CTBT is the only treaty to ban all nuclear tests in all environments, for military or civilian purposes. It also has a unique global alarm system to detect nuclear explosions. While the treaty has been adopted, it has not yet entered into force.

The CTBTO is an independent international organization with its own membership and budget, but it has had a Relationship Agreement with the UN since 2000.

Out of a total listed number of 195 States, 183 have so far signed the CTBT and 159 have ratified it. For the treaty to enter into force, ratification is required from the so-called “Annex 2 States”. Of these, China, the Democratic People’s Republic of Korea, Egypt, India, Iran, Israel, Pakistan and the United States, have yet to ratify it.

The CTBTO is tasked with building up the treaty’s verification regime so that it is fully operational when the treaty enters into force, and with promoting signatures and ratifications.

Mr. Zerbo said the CTBTO is working with officials at various levels in the countries that have yet to ratify the treaty to ensure they find the treaty verifiable, and find the technical and political means for ratification.

Secretary-General Ban Ki-moon has repeatedly called on States to ratify the CTBT stressing there are “no justifiable grounds for further delay in” preventing the treaty’s entry into force. 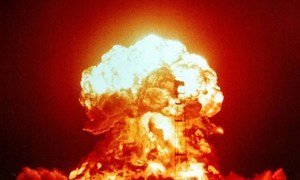 As the United marked the International Day against Nuclear Tests, Secretary-General Ban Ki-moon called on all States that have not yet signed and ratified the Comprehensive Nuclear-Test-Ban Treaty (CTBT) to do so in order to achieve the goal of a safer and more secure world.