Violaine Martin
Frank La Rue, Special Rapporteur on the promotion and protection of the right to freedom of opinion and expression.
4 September 2013

“The protection of national security secrets must never be used as an excuse to intimidate the press into silence and backing off from its crucial work in the clarification of human rights violations,” the Special Rapporteur on freedom of opinion and expression, Frank La Rue, said. “The press plays a central role in the clarification of human rights abuses.”

Mr. La Rue and the Special Rapporteur on human rights and counter-terrorism, Ben Emmerson, requested further information from the UK on the recent detention of David Miranda, partner of Guardian journalist Glenn Greenwald, who has broken several stories on surveillance activities carried out by various Governments.

Mr. Miranda was detained at Heathrow Airport in London last month for nine hours under the UK Terrorism Act 2000, which gives police with the power to arrest and detain a person without charge for up to 48 hours if they are suspected of being a terrorist. British officials also destroyed computer hard drives at the Guardian newspaper.

“It is clear that the revelations on the extensive mass surveillance initiatives implemented by some Governments need to be widely debated,” Mr. La Rue said. “The intimidation of journalists and newspapers questioning alleged abuses by intelligence bodies is certainly not a contribution to the open debate that needs to place.”

Mr. Emmerson added that current assessments of the threat posed by terrorism in the UK have changed significantly over the past three years. “There should now be a debate on the extent to which the public in both States is prepared to tolerate official access to meta data,” he stressed.

“The powers used in this case are currently under challenge in the European Court of Human Rights,” Mr. Emmerson said. “I urge the British authorities to review their operations to ensure that they comply fully with the UK's obligations under the European Convention on Human Rights regarding the right to liberty and security, and the right to respect for private and family life.”

Mr. La Rue expressed grave concern regarding the widespread use of mass surveillance in all regions of the world and its impact on human rights defenders and journalists' activities.

“National laws regulating communications surveillance are often inadequate or simply do not exist today,” he said. “Privacy and freedom of expression are interdependent rights – without adequate protection to privacy, security and anonymity of communications, no one can be sure that his or her private communications are not under States' scrutiny.”

All sides in conflicts must protect journalists – Annan 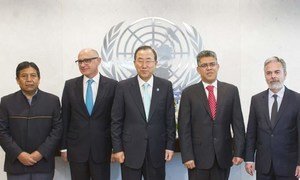